By May 12 Bangladeshi TV stations to use Bangabandhu Satellite-1 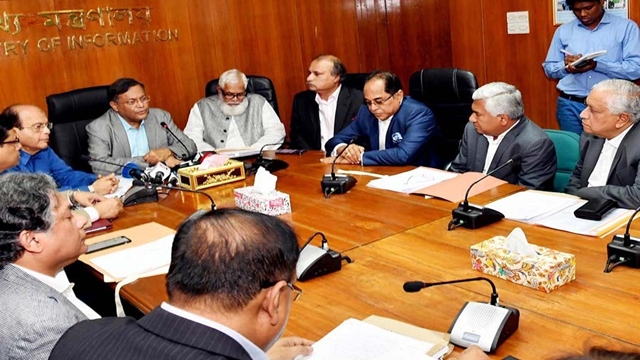 All television stations of Bangladesh will start broadcasting through Bangabandhu Satellite-1 within May 12, the first anniversary of the launch of country's first satellite.

Information Minister Hasan Mahmud  made the announcement after a meeting with the Association of Television Channel Owners (ATCO) at the Secretariat in Dhaka on Monday.

"The government-owned satellite company will serve the TV stations free of charge for three months," the minister said.

"Broadcast data will first be sent to the Sajeeb Wazed Ground Station of the satellite in Gazipur through fibre optic cable," he added.

The authorities will then distribute uplink and downlink from the station.

The authorities will fix the fees for using the satellite after discussion with all stakeholders, he added.

Hasan Mahmud said the meeting agreed that the Bangladeshi cable operators must keep the local TV channels in one serial, putting the government channels first. Foreign channels will come after local private stations.

The minister warned against broadcast of advertisements of Bangladeshi products in the country on foreign channels.

“We’ve notified the cable operators. We will issue another notice. If anyeone defies this government instruction, we will go to enforcement,” he said.

Speaking about Bangabandhu Satellite-1, he said they have agreed to emerge as pay channels when they start using the satellite.

He said they would ask for a “reasonable” share of the money cable operators charge the subscribers.