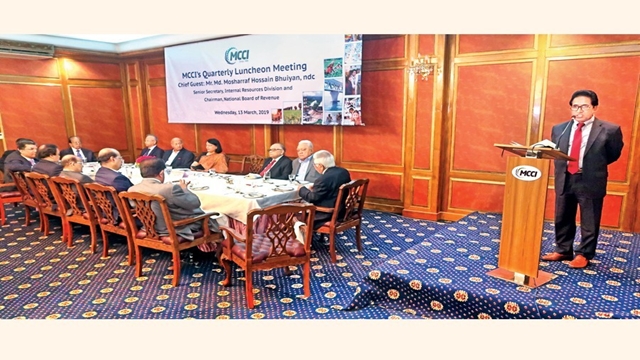 The country's leading businesses urged on Wednesday the tax authority to reduce corporate tax rates and focus on boosting investment through fiscal measures.

They also demanded an end to harassment in the name of audit and complete annual audit of tax files within a stipulated time.

They put forward the proposals at a first quarterly luncheon meeting of the Metropolitan Chamber of Commerce and Industry, Dhaka (MCCI) held on its premises.

In the welcome note, MCCI president Barrister Nihad Kabir said a vast majority of non-listed companies have to pay 35 per cent corporate tax which is 'too high'.

"When coupled with 20 per cent tax on dividends, entrepreneurs and investors indeed have an onerous tax exposure in Bangladesh," she said.

She strongly demanded that the rate should be rationalised to attract local and foreign investments.

Apex Group chairman Syed Manzur Elahi said the fiscal measures should be 'investment-oriented' rather than 'revenue-oriented'.

He also emphasised the need for boosting export-led growth for the country for job creation.

People's purchasing power is increasing because of expansion of ready-made garment export, he said.

Adeeb H Khan, former president of the Institute of Chartered Accountants of Bangladesh (ICAB), said the advance income tax should be considered as 'advance', keeping a scope to get refund.

As per the provision in income tax law that was amended two years ago, the tax authority considers all the taxes deducted at sources as 'minimum tax' with no scope of refund, even the businesses incur losses.

"There should be specific timeframe set for taxmen to expedite the approval process or waive the provisions of taxmen's approval," he said.

The applications submitted by MNCs to taxmen gather dust for six to seven months, he said.

Alihussain Akbar Ali, chairman of BSRM Group of Companies, alleged that irregularities and delay in the audit process of NBR are causing trouble to the companies.

Responding to the allegations and demands of the businesses, the NBR chairman said he is now under 'dual pressure'-- one is to mobilise higher revenue and other is to make the revenue administration business-friendly.

"We have to collect around 40-42 per cent higher revenue this year compared to that of the last year's target," he said.

All citizens should pay tax, even if it is in lower rate, but the NBR will not impose tax 'irrationally', he said.

On AIT, the NBR chief said around 65 per cent of the total tax comes from AIT which is 'not a bad tax.'

"Overall tax collection largely depends on AIT. The rates of AIT could be rationalised," he said.

The NBR will not be able to reduce dependency on AIT at this stage as it (AIT) helps collect taxes from the sectors that are not in the tax net, he added.

"We can consider a gradual reduction in the corporate tax rates. The NBR will explore how it can reduce tax rates without affecting the revenue collection," he said.

In the budget for upcoming fiscal year (FY), the NBR will adopt investment-friendly measures and incentivise domestic industry.

"We will not impose any large tax burden, but explore the possibility to rationalise the current tax structure," he added.

On dividend income, the NBR chairman said the taxation process for MNCs dividend income will be simplified to make the provisions consistent with the domestic industries.

He said foreign companies are most compliant taxpayers and maintain one book of accounts.

About abuse of the bonded warehouse facility, the NBR chief said it is a major threat to the local industry which should be checked immediately.

In the programme, the MCCI president said the NBR should make the proposed law available to the businesses community entirely, including related rules as soon as those are finalised.

"We should be given enough time to make comments on it. Such a major law, which will significantly affect a large portion of businesses, should only be made effective after businesses have had the opportunity to prepare for the changes it will entail," she said.

Responding to the proposal, the NBR chairman said there is no reason to be worried over the new VAT law rather as many say revenue collection might decrease after implementation of the new law.

BAT chairman Golam Mainuddin delivered vote of thanks in the programme.