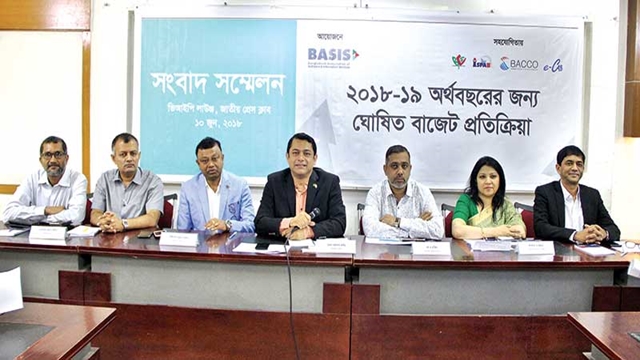 They made the call at a post-budget press conference at the National Press Club in the city on Sunday.

Alongside lowering the duty on these products, the government has also reduced import duty on 'other computer software' from 25 per cent to 5.0 per cent, he said.

"Such move will encourage the import of software, thereby hampering the growth of local software industry," he added.

The BASIS president urged the government to withdraw the proposed 5.0 per cent Value Added Tax (VAT) on ITES and not to impose it until 2024.

He praised the government's move to keep online shopping free from VAT in the next fiscal.

He urged the government to take steps to bring clarity to the definition of 'online shopping', 'e-commerce' and 'virtual business'.

He also demanded withdrawal of 15 per cent VAT on internet service for the sake of establishing 'digital Bangladesh'.

Customs duty should not be increased as these products protect electrical and electronic gadgets, he said.

ISPAB president MA Hakim called for not imposing 22.16 per cent tax on internet modem, computer network switch, hub and server as proposed in the budget.

BACCO president Wahidur Rahman Sharif said incentives for export of IT and ITES products should be increased from 10 per cent to 30 per cent to broaden the export market.