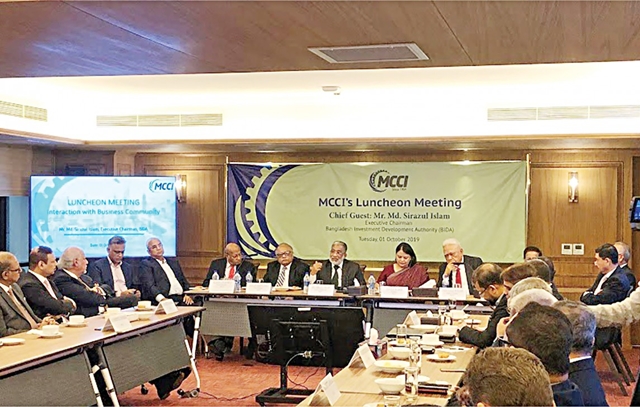 Business leaders urged the government on Tuesday to ensure proper coordination among its agencies to help expedite their service delivery to investors.

They also felt that the need for holding more interaction between the government and the investors, both local and foreign operating in the country, to help identify the bottlenecks faced by the latter.

The views were expressed at a luncheon meeting of the Metropolitan Chamber of Commerce and Industry (MCCI) at its Police Plaza office in the city.

Speaking at the programme, Chairman of the Apex Group Syed Manzur Elahi said the government agencies should deliver services to the investors with promptitude.

"There is a lack of coordination among government agencies. When an investor gets clearance from one agency, another holds it up."

Some cases remain pending for months, and the investors want to get rid of such unusual delay, he added.

Syed Nasim Manzur, Managing Director (MD) of the Apex Footwear Ltd, urged the government to form a task force with local and foreign investors as members, to hold interactions.

Interaction with the existing investors is necessary to understand the problems that are hurting the investment climate. The taskforce can hold meetings bi-monthly to give its suggestions, he said.

Mr Nasim Manzur also suggested introducing online on-arrival visas for the investors, and bring an end to harassment at the airport.

Anis Ud Dowla, Chairman of the ACI Group, suggested that the BIDA expedite the move to privatise the ailing government entities.

He also urged all concerned to address the hassle that the foreign investors face at the country's airports.

Salahuddin Kasem Khan, Chairman of the A K Khan and Company Ltd, said the government's decision-making process should be made time-bound to help ease doing business.

Syed Farhad Ahmed, MD of the aamra, said the investors face difficulties in getting the facilities that the government promise to them.

President of the MCCI Nihad Kabir delivered the welcome speech on the occasion.

She suggested the BIDA should increase the number of business associations' representatives in its governing body.

Responding to the MCCI leaders' suggestions, the BIDA executive chairman said he will take all possible steps to ensure better coordination among the government entities.

He also said the members of the business community are the brand ambassadors in the case of foreign investment in the country. He also assured the business leaders of exploring the suggestion made on the formation of a taskforce taking the investors as its members.

The cost of capital in Bangladesh is too high due to high rates of bank interest, he noted.

Vice President of the MCCI Golam Mainuddin delivered the vote of thanks.

He said new investors do make their investment decisions on the basis of experiences of the existing investors. Besides, policy continuation of the government is a key factor for the investors.

"The government's policies, including the tax measures, must be continued for at least five to ten years for facilitating the investors to make their cost of investment pay dividends," he added.