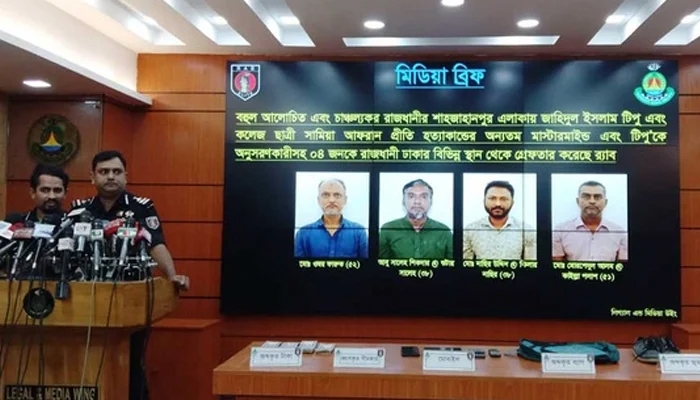 Rapid Action Battalion (RAB) have detained four people, including the alleged mastermind, in connection with the killing of an Awami League politician and a college student in Shahjahanpur.

The identities of the detainees could not be known immediately.

The elite force nabbed them from different parts of the city on Saturday, said assistant director (media) at RAB headquarters ASP Imran Khan. "A man who tailed AL politician Zahidul Islam Tipu's vehicle is among the detainees," he said.

On the night of March 24, Tipu, who was on a microbus, and Samia Afrin Priti, a college student, who was returning home on a rickshaw, were killed in a firing in front of Islami Bank Hospital.

Tipu was a former general secretary of the AL Motijheel committee while Priti was a student of Begum Badrunnesa Government College. Tipu’s driver was also injured in the firing.

They were all stuck in a traffic jam in the area when a biker wearing a helmet and a mask appeared from nowhere and fired at them, according to police.

The next day, a case was filed against unidentified people over the double murder.

On March 27, police arrested Akash, 34, the prime accused in the double murder case from Bogura district. The next day, a Dhaka court placed Akash on seven-day police remand for custodial interrogation.

On March 31, a second suspect was arrested by Dhaka Metropolitan Police detectives from the city’s Kamalapur area.