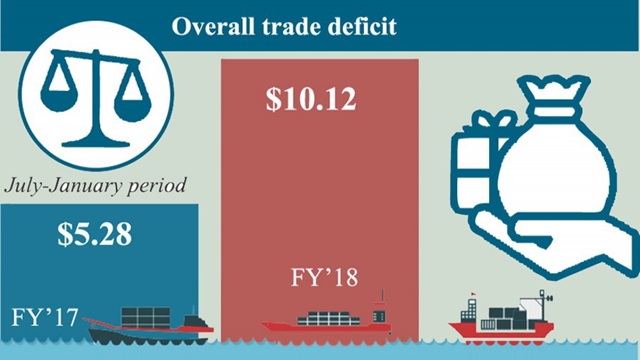 The deficit rose by nearly 92 per cent or $4.84 billion to $10.12 billion in July-January period of FY 18, from $5.28 billion in the same period of the previous fiscal, according to the latest central bank statistics.

The overall import increased by more than 25.20 per cent to $31.18 billion in the period under review of FY 18, from $24.90 billion in the same period of the previous fiscal, BB data showed.

The central bank expects that the overall trade deficit may decrease in the coming months, if the upward trend of export earnings continues.

The country's export earnings grew by 7.31 per cent to $21.05 billion in the first seven months of FY 18 against $19.62 billion in the same period of the previous fiscal.

The steady growth of export earnings continued in February that may help narrowing the overall trade deficit in the near future," BB explained.

The BB data also showed that deficit in service trade also increased to $2.58 billion in the first seven months of FY 18, which was $1.99 billion in the same period of the previous fiscal. Trade in services includes tourism, financial service and insurance.

Meanwhile, the higher trade deficit pushed down the current-account balance significantly during the period under review, despite an uptrend in inward remittance.

Bangladesh's current-account deficit reached $5.35 billion during July-January period of FY 18 against $890 million in the same period of the last fiscal. It was $4.74 billion a month ago.

Former director general of Bangladesh Institute of Development Studies (BIDS) Mustafa K Mujeri said the authorities concerned will have to take effective measures immediately to boost export earnings as well as to increase the flow of inward remittance further for improving the current account balance position.

Meanwhile, the financial account reached a surplus of $4.74 billion during July-January period of FY 18, which was $2.54 billion in the same period of FY 17.

Higher inflows of medium- and long-term loans helped to maintain a robust surplus in the financial account, according to the BB officials.

The country's overall balance of payments (BoP) slid to deficit of $1.03 billion in the first seven months of this fiscal, which was surplus of $2.19 billion in the same period of FY 17.

The BoP deficit increased significantly during the period under review of FY 18, as the country has made the highest-ever payment of $1.56 billion to Asian Clearing Union (ACU) against imports during the last two months (January-February), the central bankers explained.

"We expect that the overall BoP deficit may reduce in the coming months," a BB official noted.

The BoP deficit was $354 million in July-December period of FY 18. It was $360 million in the first quarter (Q1) of the ongoing fiscal.