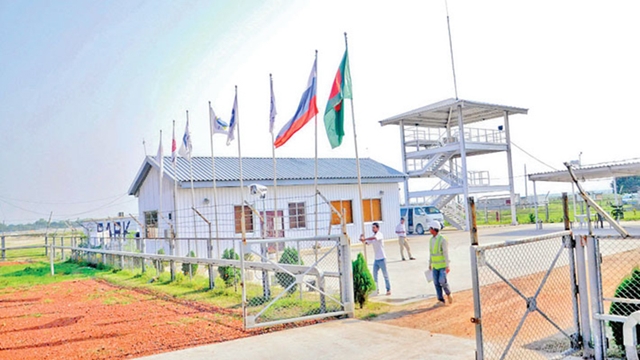 Bangladesh is going to sign an agreement with New Delhi under which Dhaka will take Indian nuclear agency's expert service in Rooppur nuclear power plant.

The science and technology ministry officials said a draft of the agreement was sent to the cabinet division for approval.

On March 2, officials from Russian State Atomic Energy Corporation (Rosatom), Ministry of Science and Technology of Bangladesh and Department of Atomic Energy of India signed a Memorandum of Understanding in Moscow in this regard.

In a statement, issued after the MoU was signed, Rosatom said Indian companies could be involved in construction and installation work, supply of materials and equipment of a non-critical category in the interests of the project.

Rooppur nuclear power plant will consist of two power units with a capacity of 1,200MW each. The two units are planned to be commissioned in 2023 and 2024. Russia will provide around $12 billion in loans, the highest amount for a single project in Bangladesh.

An official of the ministry of science said the agreement would allow the appointment of Indian experts for construction and operation of the power plant.

For proper implementation of the project, Indian experts can be appointed as “Owners' Engineer”, said the official requesting anonymity.

Nuclear power plants in India are constructed using the type of Russian technology that will be used here. As a result, service of Indian experts is being taken.

A negotiations meeting on the draft agreement was held between representatives of Bangladesh and India in Mumbai.

If the cabinet approves the draft, an inter-agency agreement on the terms and conditions of deputation of Indian experts to Rooppur will be signed by Global Centre for Nuclear Energy Partnership, Department of Atomic Energy of India and Bangladesh Atomic Energy Commission.

The work of the second phase started in 2016 and Tk 2,674 crore was spent until November last year. In the revised ADP of the current fiscal year, Tk 8,908 crore was allocated for it.