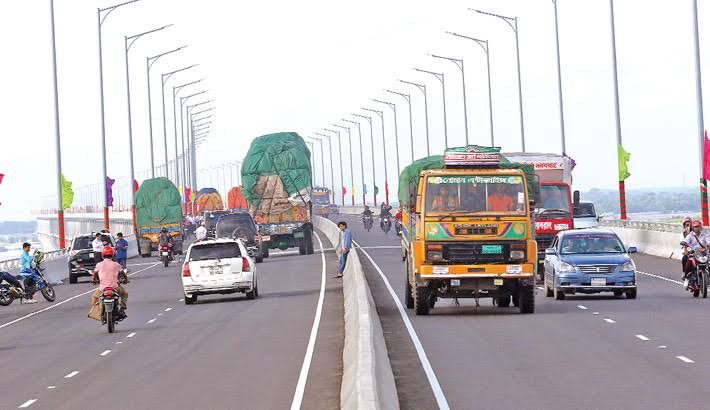 After the grand opening of Padma Bridge on June 25, Tk 803.9 million has been collected as toll from 5,75,462 vehicles that used the bridge in the last 29 days.

Vehicles from and to 21 districts of the South Western region are using the Padma Bridge.

“As the bus owners are benefiting from this, we are also creating many jobs. The travel time between Dhaka and Shariatpur is 1.5 to two hours now.”

Siraj Fakir, a farmer from Jazeera Mirasha area, said, "Now the time has changed. I can now pick vegetables from my field and sell my produce at Karwan Bazar in Dhaka and make profits.”

Meanwhile, the authorities are contemplating installing more toll booths in front of the toll plaza at the Mawa and Jajira ends of the Bridge as the slow collection of tolls has been causing traffic congestion.

Now the toll is being collected in the traditional way. In this situation, it has been recommended to increase the number of toll booths at both ends of the Padma Bridge to reduce traffic congestion.

In that case, three more booths can be added at both ends. Simultaneously, automatic toll collection booths will be launched.

In an inter-ministerial meeting held at the Prime Minister's office on July 17, it was recommended to increase the toll booths.

The meeting was held to determine the 'remediation of traffic congestion at the Padma Bridge toll plaza'.

Currently, there are 12 toll booths, 6 each at both ends of the Padma Bridge.