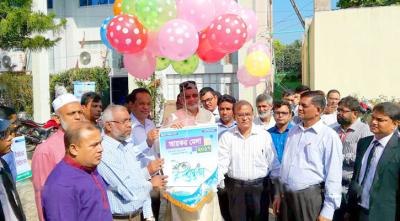 Rajshahi zone has realized income taxes of Taka 388.15 crore in the first eight months of the current 2017-18 fiscal year up by Taka 100.54 crore than corresponding months of the previous fiscal.

Number of taxpayers has also been stood to 2,12,829 during this financial year from 1.90,183 of the previous one in the zone consisting with the districts of Rajshahi, Naogaon, Natore, Chapainawabgonj and Pabna.

"Target has been set to realize taxes of Taka 832 crore in the current fiscal and we are trying to attain the target by end of the fiscal," said Dr Khandakar Ferdous Alam while talking to newsmen at his office in Rajshahi on Sunday.

He said the number of taxpayers is increasing gradually adding that the growth rate is significant. To expand the tax network, various motivational campaigns like spot assessment, survey and rewards for the taxpayers have been introduced.

Three income-tax camps were arranged at Santahar, Chanchkoir and Chatmohar to disseminate ideas and aspects of paying income taxes among rural people. Some 369 new taxpayers were identified and taxes of Taka 43.63 lakh were realized through the camps.

Every working day, large numbers of taxpayers are coming to the help desk opened at the Commissionerate's office premises directly to know how they will pay taxes.

"We got significant response from the taxpayers in the tax fairs," Dr Ferdous Alam said adding that main thrust of the fair was to inspire the taxpayers in paying more income tax spontaneously coupled with generating more taxpayers.

Income taxes of over Taka 12 crore were collected in the last year's week- long tax fair. Around 49,356 taxpayers including 921 new ones received services and 1.08 lakh returns were submitted. The fair helps lessening the panic and anxiety among the public in general about the tax payment and return submission.

Dr Ferdous said the zone has fixed target to identify 18,200 new taxpayers in the current fiscal. Priority is being given on supervising tax curtail on origin and recovery of unpaid taxes.