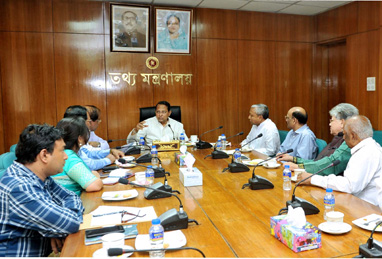 Information Minister Hasanul Haq Inu said that the government was committed to improving the film industry.

He was speaking to a delegation of film exhibitors, headed by its president Md Iftekharuddin Nawshad, as they called on the minister at his office in the capital on Tuesday.

Film exhibitors expressed their anxiety at the steady fall in revenue from film exhibition and requested the minister to hasten the process of film imports and encourage the making of better films.

The minister said that the government was sincere in its efforts to improve the industry but scriptwriters and producers must come up with quality stories for that.

He also assured them of facilitating the import of films.