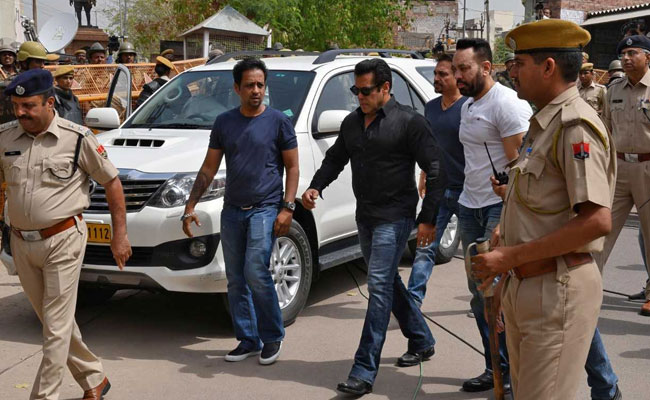 Bollywood superstar Salman Khan got bail on Saturday as hearing resumed in Jodhpur of India on his bail plea.

Earlier, the suspense on the superstar's bail plea after the transfer of District and Sessions Court Judge Ravindra Kumar Joshi came to an end when Joshi resumed the hearing in the case on Saturday morning.

Joshi had reserved his judgement on Salman's plea on Friday, asking for additional documents. Later the same night, he was among the 87 judicial officers who were transfered in what was described as a routime administrative measure. Though Joshi was tansfered to Sirohi in the same capacity, informed sources said he had been asked to continue with the bail hearing till its conclusion.

The hearing on actor Salman's application for bail and suspension of sentence in the 1998 black buck poaching case was pronounced after lunch.

Joshi heard the arguments of prosecution and defence which lasted for about an hour, defence counsel Mahesh Bora said.

Khan's sisters - Alvira and Arpita - were present during the hearing.

The actor was on Thursday convicted by a trial court and sentenced to five years in prison for killing two black bucks during the shooting of "Hum Saath Saath Hain" here.

If Salman had failed to get bail, then he would have had to spend two more nights in jail and then move the Rajasthan High Court on Monday for bail.

Salman's lawyer Mahesh Bora was representing him in court.

According to the Rajasthan High Court website, Judge Joshi's name is at 14th in the transfer list, which names Chandra Shekhar Sharma as the new District and Session Court Judge in Jodhpur on his transfer from Sirohi.