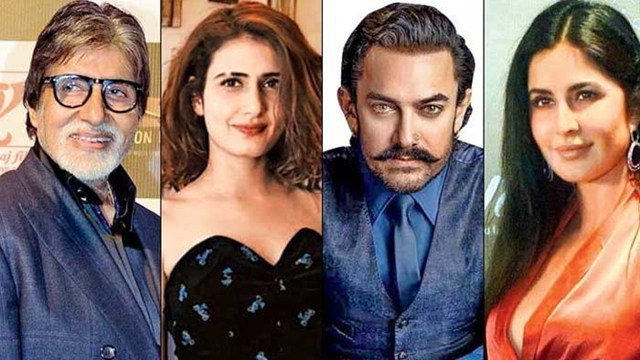 One of the biggest films of 2018, Thugs Of Hindostan is gearing up for a Diwali release. Rumours suggest that the trailer of the Amitabh Bachchan and Aamir Khan starrer will be unveiled on September 27 to coincide with the late Yash Chopra's birth anniversary. Ahead of the trailer launch, mid-day has learnt that Khan and producer Aditya Chopra have decided to introduce the principal cast — including Katrina Kaif and Fatima Sana Shaikh — by releasing a series of separate first-look posters on September 17.

The action adventure sees the four lead actors as robbers rebelling against the British Raj in 19th century India. Considering the looks of the actors have been closely guarded so far, Khan apparently suggested that unveiling their rebellious avatar would be the best way to grab audience's attention. Says a trade source, "Big B's look will be the first one to be released, followed by that of Aamir, Katrina and Fatima. Each poster will describe the character in a few lines, mid-day reports.

The final poster will see all the four thugs together. Aamir and Adi want to make a splash on the very first day of promotions. While most films kick off their promotional plan with a teaser, the duo felt that revealing the looks of the characters would make the film a talking point among fans. It will set the stage for the trailer launch that will follow 10 days later."

On the anvil is also Kaif's solo song, which is touted to be one of the most expensive numbers coming out of Bollywood. "It is titled Suraiyya Meri Jaan and comes at an interesting juncture in the film. Mounted on a grand scale, it is arguably Katrina's hottest song to date." The spokesperson from Yash Raj Films says, "The plans have not been confirmed yet."