Shooting of film on Bangabandhu likely to begin in Nov 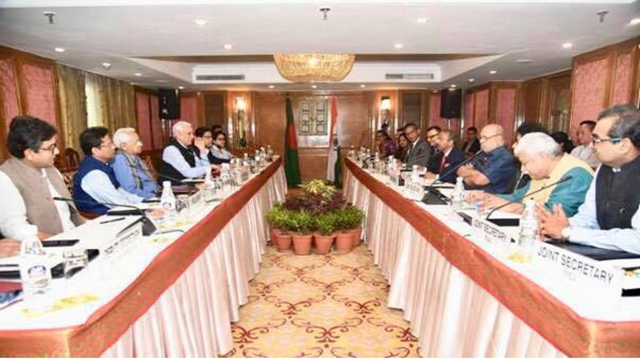 Bangladesh and India on Tuesday discussed various aspects of making a feature film on the life and works of Father of the Nation Bangabandhu Sheikh Mujibur Rahman.

The shooting of the film is expected to begin by November next.

The issue was discussed at a meeting between Secretary Amit Khare and other officials of India’s Ministry of Information and Broadcasting and a Bangladesh delegation led by Prime Minister’s International Affairs Adviser Dr Gowher Rizvi in New Delhi.

The film on Bangabandhu is slated to be released by March 17, 2021 marking his birth centenary. Work on the biopic on Bangabandhu will complete before the end of the ‘Mujib Year 2020-21’.

The movie will be directed by acclaimed filmmaker Shyam Benegal who, along with scriptwriter of the movie Atul Tiwari, was also present during the meeting.

The coproduction of a documentary on Bangladesh Liberation War was also discussed at the meeting.

It was mutually agreed that the director of the documentary would be from Bangladesh who would be assisted by a co-director from India.

On April 3, renowned Indian film director and screenwriter Shyam Benegal met Prime Minister Sheikh Hasina at her official residence Ganobhaban and discussed various aspects of the preparations for the biopic to be made on Father of the Nation Bangabandhu Sheikh Mujibur Rahman.

The film based on Bangabandhu’s biography will be made under the joint production of the governments of Bangladesh and India.

In 2017, the two countries signed an agreement to produce the film on Bangabandhu and a documentary on the Liberation War.