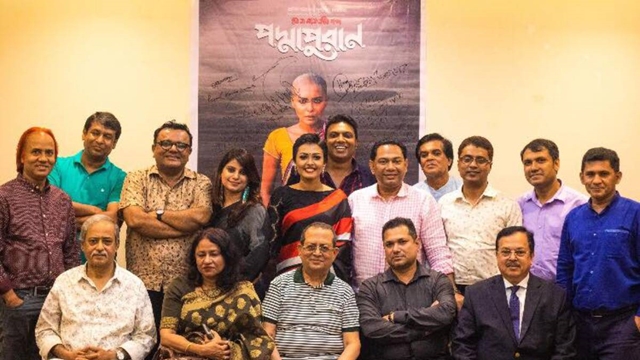 BizNext PLUS, a Dhaka-based communication and image management company, has teamed up with an upcoming Bangla feature film “Padmapuran” as a promotional partner at home and abroad.

‘Padmapuran’ is a full-length film now being prepared for screening soon.

Arpita Chowdhury, chief executive officer of the BizNext PLUS, and Rashid Polash, director of the film, signed a Memorandum of Understanding (MoU) on Saturday evening in Banani Club Ltd for jointly working on promotion.

Guests including senior journalists who joined the ceremony signed the first poster of the film as part of its promotion amid hope for spreading awareness message on climate change and its effects on people.

Rashid Polash said BizNext PLUS has partnered with his film for all of its promotional activities as the story revolves around the mighty river Padma. The story

relates to climate change and how a dying river influences an entire population, their lives and livelihood, he said.

Arpita Chowdhury of Biz Next PLUS said, “It’s a great honour to be part of the film that I am sure will draw the attention of both critics and cinema lovers.”

Hassan Shahriar, former President of the National Press Club and President Emeritus of the Commonwealth Journalists Association (CJA) said story-line of the film ‘Padmapuran’ has already attracted their attention and the songs of the film are great.

Farida Yasmin, incumbent general secretary of the National Press Club, said she was touched by the film’s story and was in particular happy that it featured strong characters by women.

Other actors include Sumit Sengupta, Joyraj, Kayes Chowdhury, Hedayet Nannu. The screenplay has been written by Raihan Shoshi while it has been produced by Punnah Films.