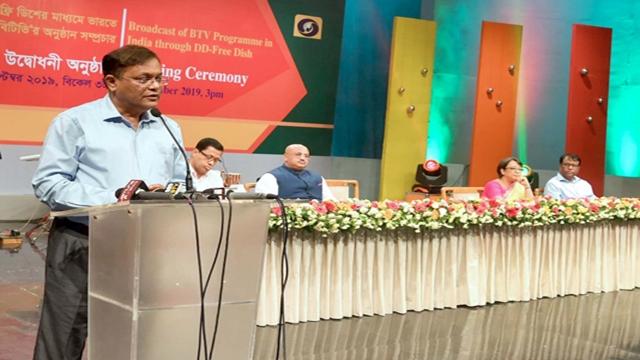 The broadcasting of Bangladesh Television’s (BTV) programmes in India was launched today with a high hope to strengthen the bilateral ties between two neighbours – Bangladesh and India – in the arenas of culture, media and communication.

“For the first time, BTV got the opportunity to air its programme in India, while Indian state-owned Doordarshan in Bangladesh as well. The telecast has begun at 9.30 am (Bangladesh time) in India and the Indian people can now watch the BTV’s progarmmes round-the-clock,” Hasan told the launching ceremony.

Terming the day one as the historic moment for BTV, he said: “It is the outcome of farsighted vision of Bangabandhu’s daughter and Prime Minister Sheikh Hasina and her Indian counterpart Narendra Modi”.

They jointly announced that an agreement would be signed between BTV and Prasar Bharati of India during the visit of Indian premier to Bangladesh in 2015, Hasan said, adding a working agreement was signed between the two organisations on May 7 last in this regard.

“Now, the people of the two neighbouring countries can know the culture and heritage of each other,” the minister said.

Highlighting the global village context, he said cultural activities should not be confined within a state’s boundary. “People can know all information in no time…I think there should be no boundary to air TV channels of a country to other counties in the present context of global village,” he said.

He hoped that the relations and intimacy between the two neighbours would be stronger in the future.

Mentioning that the relations between Bangladesh and India reached a new height in the last 10 years under the dynamic leadership of Bangabandhu’s daughter and Prime Minister Sheikh Hasina, the information minister said broadcasting BTV’s programmes in India added one more dimension to the bilateral relations.

Recalling the cooperation of the Indian government and its people to Bangladesh during its Liberation War in 1971, Hasan said the country’s people will remember the India’s support for ever.

“I am remembering the cooperation and sacrifice of the Indian government and its people with utmost respect,” he said.

Murad said Bangladesh is moving fast to materialise the dream of Father of the Nation Bangabandhu Sheikh Mujibur Rahman under the dynamic leadership of Prime Minister Sheikh Hasina.

Riva Ganguly said the initiatives of airing BTV in India and Doordarshan in Bangladesh will strengthen the bilateral relations of the two countries.

Secretary of the Indian Ministry of Information and Broadcasting Amit Khare sent a video message on the occasion.

Airing of BTV in India through DTH (Direct-To-Home) platform of Doordarshan, the state-owned TV channel of India as connection between BS-1 and Indian Doordarshan was fixed on July 3.

On July 3, the BTV and Doordarshan’s technical teams watched BTV by downlinking its programmes at Doordarshan’s earth station by fixing alignment of BS-1 (Bangabandhu Satellite).

Initially, the viewers are able to watch BTV World service programmes in India.