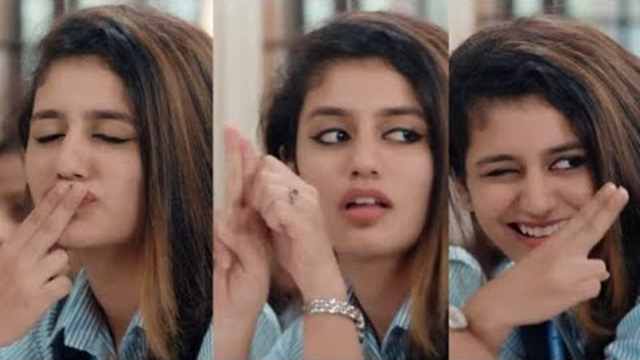 It’s hard to believe but actually, a wink of an eye can make you a celebrity in just 24 hours. This is what exactly happened with Malayalam actress Priya Prakash Varrier who became an internet sensation in a jiffy. Unanimously declared as the National crush of India, her wink has captured millions of hearts and has become the first viral sensation to come out of India in 2018. The actress has gained more than 2.3 million Instagram followers so far.

Priya Prakash Varrier is a budding Malayalam starlet who is making her debut in Oru Adaar Love. She made headlines for her flirtatious wink in the clip released on social media. Within few minutes the clip sent social media into a meltdown. She became an overnight internet sensation with just a wink.

The wink took social media including Facebook, Instagram and Twitter by storm. It is a video clip from the song Manikya Malaraya Poovi, where she is clad in a school uniform and flirting with a classmate. Directed by Omar Lulu, Oru Adaar Love is slated to release on March 03, 2018.

Priya, the lead actress of Omar Lulu’s upcoming movie ‘Oru Adaar Love’ became a sensation on the internet after the very first song sequence of the movie was released online, wherein the 18-year-old plays a schoolgirl, flirting with a fellow student, raising her eyebrows and winking at him.

Priya Prakash Varrier in an interview to India TV, has made 5 revelations that will surprise you.

The wink was spontaneous

Priya Prakash Varrier reveals, “Actually, the director wanted to capture something cute between me and my hero. So, he told me if I can do the eyebrow thing and wink at him. I told him that I could give it a try. That’s how it worked out. It was spontaneous, and we hadn’t planned anything.”

Whom does she want to work with?

“I want to work with Shah Rukh Khan and want to do a Sanjay Leela Bhansali’s film.” Priya told India TV. This shows her fondness towards King Khan and the ace director.

Who is Priya’s favourite cricketer

When asked about her favourite cricketer, Priya said, she is really fond of former Indian captain Mahendra Singh Dhoni.

How is Priya’s Hindi so fluent?

Hearing a Malayali speaking Hindi fluently is too rare, but Priya proved this wrong. That’s because Priya is quite fluent in Hindi language. When asked about this she told India TV, “Though I’m a Malayali born in Kerala, I have been brought in Mumbai also and there is where I got my hands on Hindi language.”

This is probably the most surprising revelation made by Priya. In the interview, she said, “The only social media platform I had was the Instagram. It just been two days that I have a Facebook account. I do not have a Twitter handle.” Priya Prakash Varrier’s Instagram profile has 2.5 million followers, with a blue tick.