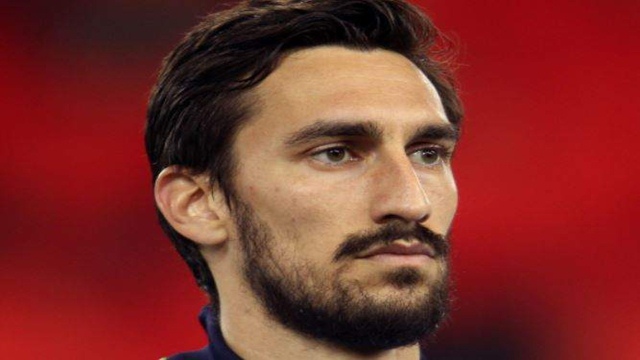 Italian footballer Davide Astori likely died from a cardiac arrest linked to the slowing of his heart rate, local media reported on Tuesday following the initial results of his autopsy.

Fiorentina and Astori's former club Cagliari announced they will retire his number 13 shirt in honour of the 31-year-old Italy international, who was found dead in his hotel room on Sunday ahead of a Serie A match at Udinese.

Doctors who carried out the player's autopsy referred to a "cardiac arrest without a visible explanation, in all likelihood due to a bradyarrhythmia (slow heart rate)", Corriere dello Sport and Tuttosport reported.

"We won't have the definitive diagnosis for two months (and then) we will be able to say with certainty that there was no detectable cause or any other element of any type," Udine prosecutor Antonio de Nicolo said.

De Nicolo was quoted Sunday as saying Astori died of "natural causes" after a "cardiac circulatory collapse" -- a type of heart attack, which the autopsy appears to confirm.

Fiorentina players and staff paid tribute on Tuesday to their captain Astori at the club's Artemio Franchi stadium, where dozens of messages, banners and scarfs adorned fences outside the ground.

Croatian Milan Badelj, the team's vice-captain, left a white rose in memory of his team-mate, and the players hung up two signed Astori jerseys as well as a large photo of the defender.

They then observed a minute's silence which concluded with a round of applause led by Fiorentina coach Stefano Pioli, as the players returned to training just two days after the tragic death.

Astori's body on Wednesday will be taken to the Italian football association's national training centre in Coverciano, Florence, where people will be able to play their last respects to the defender.

His funeral will be held at the Santa Croce basilica on Thursday before his burial near Bergamo, in northern Italy, where Astori grew up and his parents still live.

All seven Serie A matches were postponed on Sunday following the news of Astori's passing, while all the midweek games in the Champions League and Europa League will be preceded by a minute's silence.

Fiorentina will make an emotional return to action this weekend at home to bottom side Benevento, who will wear shirts carrying the message "Ciao Davide" on the sleeve.

Astori, who leaves behind a wife and a two-year-old daughter, began his career at AC Milan, also playing for Cagliari and Roma before joining Fiorentina in 2015.

He made 14 international appearances for Italy, scoring once against Uruguay in the 2013 Confederations Cup.