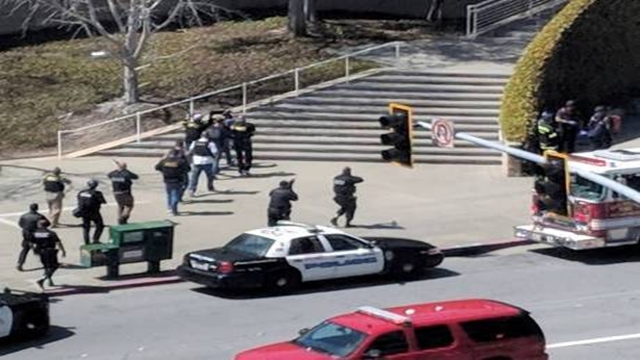 Gunshots erupted at YouTube's offices in California Tuesday, sparking a panicked escape by employees and a massive police response, before the shooter -- a woman -- apparently committed suicide.

Police said three people had been hospitalized with gunshot injuries following the shooting in the city of San Bruno, and that a female suspect was found dead at the scene.

"We have one subject who is deceased inside the building with a self-inflicted wound," San Bruno Police Chief Ed Barberini told reporters. "At this time, we believe it to be the shooter."

Employees recounted frantic scenes as they fled the headquarters of the Google-owned video sharing service near San Francisco, with one saying he saw blood on the floor as he escaped.

"We were sitting in a meeting and then we heard people running because it was rumbling the floor. First thought was earthquake," employee Todd Sherman tweeted.

Sherman said that as he headed for an exit "someone said that there was a person with a gun," and added "at that point every new person I saw was a potential shooter."

Sherman's tweets continued: "I looked down and saw blood drips on the floor and stairs. Peeked around for threats and then we headed downstairs and out the front."

One image posted by a Twitter user showed employees being led out of the building with their hands up, with no further explanation.

Another YouTube employee, Vadim Lavrusik, tweeted: "Active shooter at YouTube HQ. Heard shots and saw people running while at my desk. Now barricaded inside a room with coworkers."

Later, Lavrusik said he had escaped to safety.

Witnesses reported helicopters on the scene as well as police SWAT teams.

The White House said President Donald Trump had been briefed and that his administration was monitoring the ongoing situation in San Bruno.

Google communications tweeted: "Re: YouTube situation, we are coordinating with authorities and will provide official information here from Google and YouTube as it becomes available."

YouTube headquarters is located some 30 miles (50 kilometers) from the main Google campus in Mountain View. afp