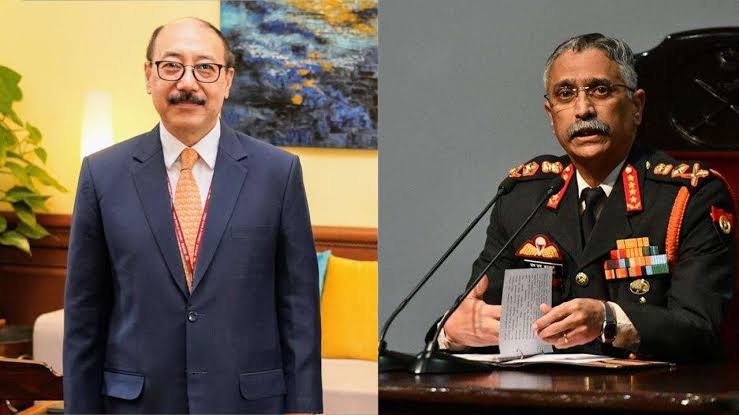 After Dhaka visit, Indian Foreign Secretary Harsh Vardhan Shringla is going to undertake a crucial trip to Myanmar on Sunday.

Indian Army Chief General MM Naravane and large number of entourages will be with him.

The Foreign Secretary is set to hold high level discussions. He along with army chief is expected to meet Myanmar State Counsellor Aung San Suu Kyi and Army Chief in Naypyidaw on Monday. It will be a two day visit.

In his opening remarks, he clearly said ,"our efforts towards ensuring an early, safe and sustainable repatriation of internally displaced persons(Rohingyas) to Myanmar will continue."

India has reiterated trilateral cooperation with Japan on the Rakhine state under which soft infrastructure will be created. This is only the second time that Foreign Secretary visits Myanmar.

Inclusion of Army Chief is significant in a sense that south block understands power lies in military in case of Myanmar.

Diplomatic experts think the issue of Rohingya repatriation will figure without jeopardising the India's long-term interest on connectivity in the crucial visit before the general election in Myanmar.

In the foreign office consultation, it was decided that Sittwe port, being built by India, will be opened in the coming year.
At the same time, trilateral highway across India-Myanmar-Thailand in the making will be discussed.

Indian Army Chief will have interaction with Myanmar Commander-in-Chief Senior General Min Aung Hlaing to review the progress and plan for the next steps.

Without mentioning the name of Bangladesh, Shringla in the foreign office consultation meeting mentioned that Myanmar is a country of special importance to India as it stands at the confluence of India's 'neighborhood first' and 'act east ' policies.

A joint statement issued after the meeting quoting Bangladesh Foreign Minister as saying that delay in resolving Rohingya crisis may create possibility of radicalism disrupting economic growth, peace and stability in the region.

Therefore, Shringla is expected to raise the issue during his meeting with leadership of Myanmar.