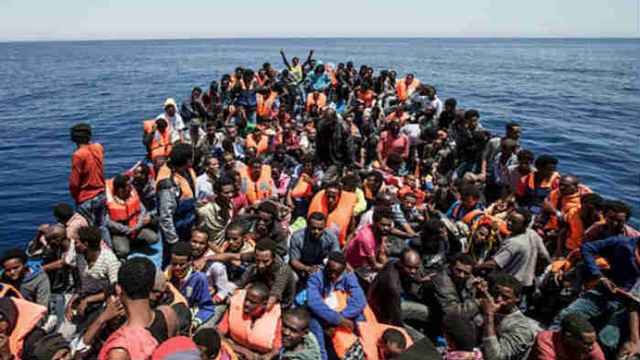 European law enforcement officials say they are tracking at least 65,000 migrant smugglers, twice as many as at the height of the migration crisis three years ago, as the illegal trade booms.

Despite a drop in the number of migrants successfully crossing the Mediterranean since Europe's biggest migration crisis since World War II erupted in 2015, the EU's police agency Europol said demand for smugglers was still "huge".

Many new suspects have also been identified, Europol added, as investigators in European countries track one of the fastest growing forms of international organised crime.

"At the end of last year we had 65,000 smugglers in our data bases," Robert Crepinko, head of Europol's European Migrant Smuggling Centre, told AFP at his offices in The Hague.

Sixty-three percent of those whose nationalities it has identified are from Europe, including 45 percent from Balkan countries, according to Europol figures.

Crepinko said smuggling is "still a booming business" worth billions of euros despite a drop in migrant arrivals last year following EU cooperation deals with Turkey and Libya, the main gateways to Europe.

Libya is currently the main migrant springboard to Europe where reports of enslavement on top of other horrific abuses of sub-Saharan Africans prompted urgent action at an EU-Africa summit in Abidjan in November.

Thousands of migrants were quickly repatriated from Libya to their home countries under a deal reached at the meeting.

French President Emmanuel Macron also announced the two sides would share more intelligence to "dismantle the networks and their financing and detain traffickers."

But Crepinko said further law enforcement cooperation depends on obtaining guarantees that human rights will be respected, a challenge when dealing with many African governments.

"That's why there will be no quick wins in that," the Europol official said.

Since last year, Europol has been operating on a new legal basis that restricts information it can share with non-EU countries.

But the agency cited recent successes in cooperation including the break-up of a gang sending young Nigerian women to Spanish cities for prostitution.

Italy, the EU's main migrant entry point, agreed in December to set up a crime-fighting cell with Libya's western-backed government in Tripoli.

Libya then announced last month arrest warrants for 205 people including members of the Libyan security services and embassy officials from African countries based in Libya over people-smuggling.

Amnesty International's Marwa Mohamed said the move, which resulted from Italian and Libyan cooperation, could be a step toward ending the sense of "total impunity" in Libya.

Mohamed, based in neighbouring Tunisia, said Amnesty was checking whether the "authorities follow through with arrests and prosecutions in proceedings that guarantee a fair trial."

But Eugenio Ambrosi, head of the Europe office for the International Organization for Migration (IOM), said the EU had put too much priority on sealing its borders.

"It is also a question of attacking the sector of the market in Europe that exploits trafficked and also smuggled people," Ambrosi said. afp