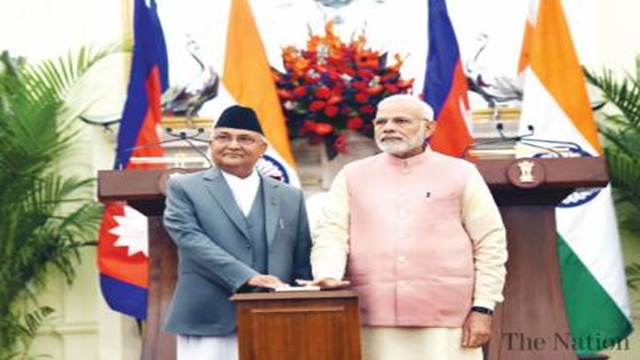 The agreement was made following talks in New Delhi between Indian Prime Minister Narendra Modi and his Nepali counterpart K.P. Sharma Oli, who is on his first foreign visit to India since taking office earlier this year.

During Oli's previous term in office in 2015, he signed a series of agreements with Beijing seeking to lessen Nepal's dependence on India.

But the prime minister -- who returned to power in February with a strong two-third majority in parliament -- will need to balance relations with both of Nepal's large neighbours if he is to make good on his ambitious plans to kickstart growth at home.

"Enhanced connectivity will definitely contribute to our desire to be a land-linked country instead of land-locked," Oli said in Delhi following talks with Modi.

"Our future lies in the expansion of economic engagement, namely growth of bilateral trade."

Nepal currently has a limited railway network and the proposed line would be the first to reach Kathmandu.

It is also in talks with China to link Nepal to Tibet by rail as part of China's ambitious Belt and Road initiative, which Kathmandu signed up to last May.

The plan to develop inland waterways would give landlocked Nepal much-needed access to sea, boosting its exports. afp