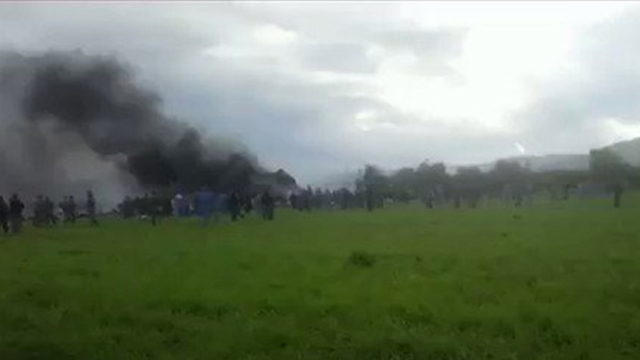 At least a hundred passengers have been reported killed, after a military plane crashed near the Boufarik airbase outside the Algerian capital, Algiers, media reports said.

Algerian state radio reported on Wednesday that at least 100 passengers were killed in the crash.

The plane, an Ilyushin Il-76, was carrying scores of military troops, according to the reports.

Algerie24, a local news website, said the plane was heading to the western Algerian city of Bechar.

Images posted on an Algerian website showed thick smoke billowing from the site of the crash, as several people rushed to help.

The crash at Boufarik would be the worst in Algeria since 2003 when an Air Algerie jet crashed shortly after takeoff from Tamanrasset, killing 102 people.

In 2014, more than 70 off-duty military personnel and their family members were killed when a C-130 plane crashed into the Djebel Fertas mountain shortly before it was to land in the northern city of Constantine.

A month earlier, a twin-turboprop CASA C-295 military transport aircraft, which was carrying a cargo of paper for the printing of banknotes in Algeria, crashed in southern France.

That plane was carrying five soldiers and a representative of the Algerian central bank, none of whom survived.