Arab Summit opens in SA amid tensions in region 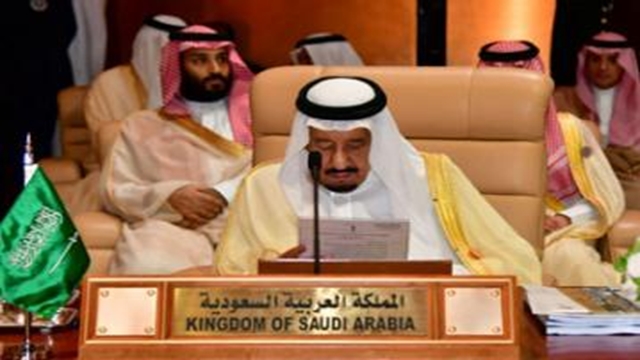 The one-day annual gathering of the Arab leaders called Arab Summit was opened Sunday at the eastern Saudi city Dhahran as tensions gripped the region over the Syria crisis, Israeli aggression on Palestine, Yemen's civil war and the Riyadh's growing conflict with Iran.

According to international media reports Syrian developments was supposed to take the center stage at the summit while King Salman called for unity of Arab policies against all challenges saying that the Palestinian cause was still the main issue for the Arab world to resolve.

But the Saudi King avoided elaboration of the Syrian issue in his address, as a seat marked "Syrian Arab Republic" sat empty in the hall.

But he said Riyadh was against any policy to divide Syria, calling for efforts to bring upon a peaceful resolution to the crisis in the fellow Arab country.

Saudi Arabia on Saturday, however, declared its full support for US-led air raids on Syria, which the Pentagon said had "successfully hit every target" but King Salman yesterday strongly denounced the US over its recognition of Jerusalem as Israel's capital.

He expressed his refusal of the US decision to move the American embassy from Tel Aviv to Jerusalem, saying that it would hinder Middle Eastern peace efforts and violate Palestinians right for a sovereign nation.

"We reiterate our rejection of the US decision on Jerusalem. . . East Jerusalem is an integral part of the Palestinian territories," Salman said, though his country is considered a stalwart ally of the United States.

Arab ministers at a preliminary meeting in Riyadh on Thursday focused heavily on blocking the move, unanimously condemning Trump's decision while the Saudi king on Sunday announced a $150 million donation for the maintenance of Islamic heritage in East Jerusalem.

Salman called for efforts to end the Yemen conflict in line with UNSC resolutions, the GCC initiative, and the Yemeni national dialogue.

But he accused Iran of interference in Arab affairs saying that the people of the region did not appreciate Tehran's support of the Houthi militias in Yemen and its acts to create sectarian strife in the region.

"We renew our strong condemnation of Iran's terrorist acts in the Arab region and reject its blatant interference in the affairs of Arab countries," the king said.

The 22-member Arab League drew 17 leaders from across the Arab world, minus Syrian President Bashar al-Assad as world powers face off over Syria.

Qatar did not send any representatives at the summit taking place, with analysts fearing that a nearly year-old dispute between Gulf Arab neighbours was still a long way from being resolved though Saudi Foreign Minister Adel al-Jubeir earlier said Qatar's crisis would not be on the table at the summit.

Saudi Arabia, the United Arab Emirates, Bahrain and Egypt severed diplomatic and transport ties with Qatar in June 2017, accusing it of supporting terrorism but Doha denied the charges and said that the boycott was an attempt to impinge on its sovereignty.

The US president earlier publicly sided with the Saudis and Emiratis early in the crisis, but is now pushing for a resolution to restore Gulf Arab unity and maintain a united front against Iran.

The Saudi King assumed the presidency of the 29th summit after King Abdullah II bin Al-Hussain of Jordan who as the outgoing president of the previous summit delivered a speech expressing his thanks to his Saudi counterpart for hosting the meet.