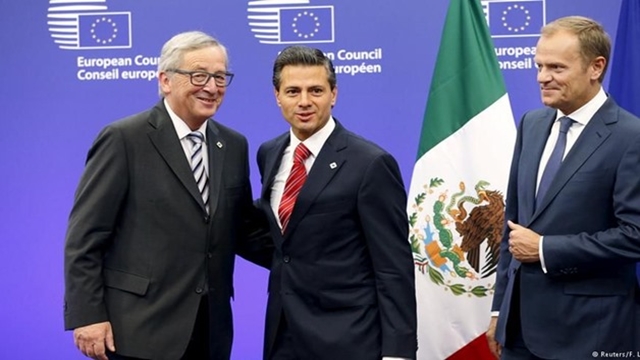 The EU and Mexico said Saturday they had reached an "agreement in principle" to modernise an existing free trade deal, as the Latin American country faces pressure from protectionist measures threatened by US President Donald Trump.

Under the updated terms of the 2000 deal, "practically all bilateral trade in goods will now be duty-free, including in the agricultural sector," the European Commission, the EU's executive arm, said in a statement.

The move is seen as sending a strong signal to Trump who last year launched renegotiations of what he has previously referred to as Mexico's "cash cow" -- the North American Free Trade Agreement (NAFTA).

The US leader's threat to even axe NAFTA altogether if he is not happy with the new conditions has stoked tensions and uncertainty among signatories to the deal, which also include Canada.

While some "technical issues" remained, Brussels said it expected to finalise the full legal text by the end of the year.

"In less than two years the EU and Mexico have delivered a deal fit for the economic and political challenges of the 21st century," said Malmstrom.

"Today's agreement also sends a strong message to other partners that it is possible to modernise existing trade relations when both partners share a clear belief in the merits of openness, and of free and fair trade."

The pact, which is modelled on a recently agreed trade deal between Brussels and Canada, will then need to be green-lighted by the bloc's 28 member states and the European Parliament.

On Wednesday, the EU unveiled plans to fast-track deals with Japan and Singapore, saying it was leading the defence of free trade in the face of US "protectionism".

"With this agreement, Mexico joins Canada, Japan and Singapore in the growing list of partners willing to work with the EU in defending open, fair and rules-based trade," European Commission chief Jean-Claude Juncker said Saturday.

It will also protect "340 distinctive European foods and drink products in Mexico" from imitation, Brussels said.

Since the deal was first signed in 2000, trade between the EU and Mexico has risen at a yearly rate of around 8 percent per year, resulting in an overall increase of 148 percent over that period, according to the European Commission. afp