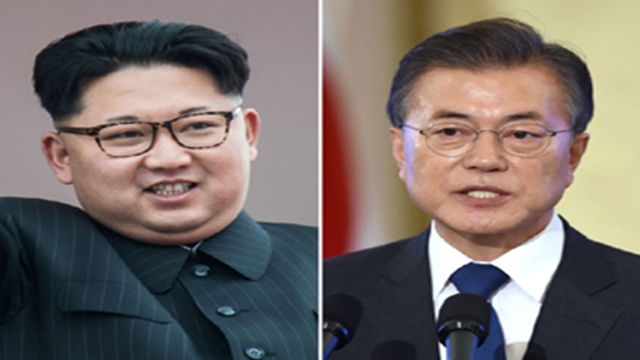 South Korean President Moon Jae-in and the North's leader Kim Jong Un will meet at the Military Demarcation Line that divides the peninsula for their summit Friday, Seoul said, in an occasion laden with symbolism.

Moon will greet his visitor at the concrete blocks that mark the border between the two Koreas in the Demilitarized Zone, the chief of the South's presidential secretariat Im Jong-seok said.

When Kim steps over the line he will become the first North Korean leader to set foot in the South since the Korean War ended 65 years ago.

He will be given a military honour guard and the two leaders will walk to the Peace House, a glass and concrete building on the southern side of the truce village of Panmunjom where the summit will be held.

Kim will sign the guest book before the morning session starts, calling the occasion a "summit for peace and prosperity on the Korean peninsula".

The delegations will have separate lunches, Im told a briefing, with the North's group crossing back to their side of the border to eat.

Moon and Kim will plant a tree together on the demarcation line before the afternoon session in the Peace House, Im said.

After they sign an agreement a joint statement will be issued.

A banquet and farewell ceremony will follow in the evening before Kim returns to the North.

Pyongyang's delegation will include Kim's sister Kim Yo Jong, one of his closest advisers, who attended the Winter Olympics in the South in February as his envoy, Im said.

The North's ceremonial head of state Kim Yong Nam, who accompanied Yo Jong to the Games, will also be part of the group.