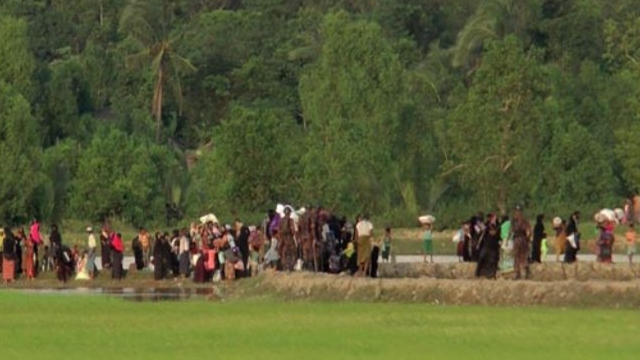 Thousands of people have fled renewed fighting between the Myanmar army and ethnic insurgents in Kachin state, a United Nations official said, as a long-simmering conflict intensifies.

More than 4,000 people have been displaced in the country's northernmost state near the border with China in the last three weeks, said Mark Cutts, the head of the UN Office for the Coordination of Humanitarian Affairs (OCHA).

The numbers do not include some 15,000 people who have fled since the beginning of the year and upwards of 90,000 residing in IDP (internally displaced persons) camps in both Kachin and Shan states since a ceasefire between the government and the powerful Kachin Independence Army broke down in 2011.

"We have received reports from local organisations saying that there are still many civilians who remain trapped in conflict-affected areas", Cutts said of the recent clashes.

"Our biggest concern is for the safety of civilians -- including pregnant women, the elderly, small children and people with disabilities. We must ensure that these people are protected."

The OCHA has been unable to verify reports that civilians have been killed in the fighting.

In addition to the Rohingya crisis in the western part of mainly Buddhist Myanmar, the conflict-hit north has also been the site of clashes involving other ethnic minorities, which rarely make headlines.

Myanmar's border areas have been unstable since its independence from British colonial rule in 1948, hosting a dizzying array of insurgencies, local militias, and drug-running operations.

State Counsellor Aung San Suu Kyi said making peace was her priority when she took office in 2016 after decades of military rule but progress has been slow.

Ethnic armed groups are demanding more autonomy and control from a country in which the Burmese hold major positions of power in politics and the armed forces.

Rights groups say the army has stepped up its campaign in other remote areas amid the Rohingya crisis, which has resulted in 700,000 people fleeing to Bangladesh.

The US and the UN have called the military crackdown against the Muslm Rohingya in Rakhine state ethnic cleansing, while Myanmar denies the claims and says it was defending itself against insurgents. bangkokpost