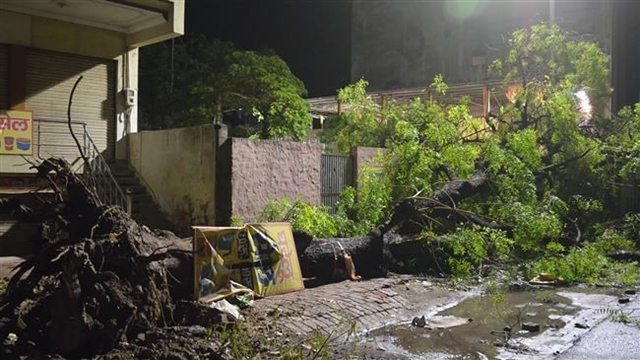 The death toll from freak storms that hit India climbed above 140 yesterday as people recounted how they had no time to escape the ferocious winds which tore down homes and toppled walls.

Amid warnings of further wild weather, thousands of families spent the night in the open air in the northern states of Uttar Pradesh and Rajasthan.

They told of how 130 kmh winds carrying choking sand hit so quickly late on Wednesday that they had no time to reach safety from falling walls and trees.

The dust storms claimed 121 lives in Uttar Pradesh, Rajasthan and nearby Uttarakhand and Punjab states, according to latest official tolls.

Separately, 21 people were killed by lightning in two southern states.

The authorities in Uttar Pradesh, where 76 died, and Rajasthan, where the storms claimed 39 lives, battled to restore power, clear roads and help people who lost houses.

Residents remain fearful. "We couldn't sleep and were worried if the storm hits again. We took precautions and secured everything, but nothing can stand up to nature's fury," said 40-year-old Agra resident Munna Lal Jha.

Agra district was one of the worst-hit areas, with at least 43 people killed, according to the state disaster management authority.

Twenty-four of them were killed in the small town of Kheragarh, near Agra. Many people in the region live in mud-wall homes that would have barely resisted the ferocious winds.

Four children from the same family were killed when a wall collapsed on them in Kheragarh.

Damaged houses lined the town's dusty roads. Heaps of stones and bricks lay where dozens of homes were destroyed by the gale-force winds. Villagers salvaged their belongings from under the debris or fixed broken windows and doors blown away in the storm.

Some were left only to mourn. Mr Ram Bhorosi recounted how his son and a nephew died when their house caved in as they welcomed people who had attended his daughter's wedding.

"We had guests at home and my son went inside the room to get a bed when the storm struck," he said. "A big stone crushed his head after the roof collapsed. His cousin was also caught under the crumbling roof. Half a dozen men helped us to clear the rubble to take out bodies. They didn't have time to raise the alarm, it was so sudden."

At Bharatpur, in Rajasthan, a college gate pillar toppled, killing three young men, all 18, who had just been accepted as police constables or soldiers, media reported.

The India Meteorological Department has warned there are likely to be more storms over a wider area until Tuesday.

Storms and lightning strikes kill many people every year in India, but this was one of the most severe series of storms in recent decades.