41 people killed in storms across India 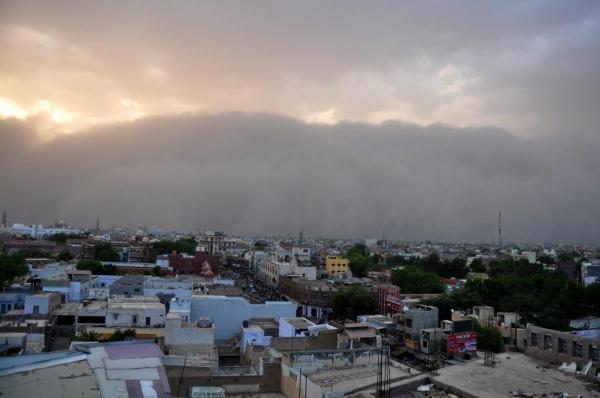 At least 41 people were killed and many others injured across India after dust storms, thunderstorms and rain accompanied by gusty winds hit many states including Uttar Pradesh, West Bengal, Andhra Pradesh and the national capital New Delhi, officials said Monday.

According to Meteorological department officials, squall and dust storm with a wind speed of upto 109 kmph hit capital city and its outskirts.

The storms caused disruption in flight, rail and metro operations in the capital city, affecting commuters.

Reports quoting officials said about 70 flights were diverted from Delhi's Indira Gandhi International Airport and flight operations were put on hold due to storm. Likewise, Delhi Metro services were hampered in wake of the storm, following which thousands of commuters were stuck on the metro stations.

The trains were slowed down as a precaution.

Indian prime minister and president have expressed their sadness over the deaths caused due to storms.

"Saddened by the loss of lives due to storms in some parts of the country. Condolences to the bereaved families. I pray for the speedy recovery of those injured. Asked officials to provide all possible assistance to those affected," Modi wrote on twitter.

India's Meteorological department officials said thunderstorms are expected across north-west India over the next 48 to 72 hours, as several weather phenomena, including western disturbances, converge.

"The thunderstorms will continue for the next 48 to 72 hours over north- western, eastern and southern parts of the country," AIR quoted Met Department official Mrutyunjay Mohapatra as having said. "Thunderstorms are occurring due to circulation of a western disturbance in North West India and strong easterlies."

Local government in Uttar Pradesh have advised people in the state to remain indoors inside the concrete structures and avoid venturing near trees, transformers and electricity polls during the time of storm.

Last week 18 people were killed in thunderstorm and rain-related incidents in Uttar Pradesh.

Earlier this month at least 124 people were killed and more than 300 others injured in five Indian states due to dust storms, thunderstorms and lightning. afp