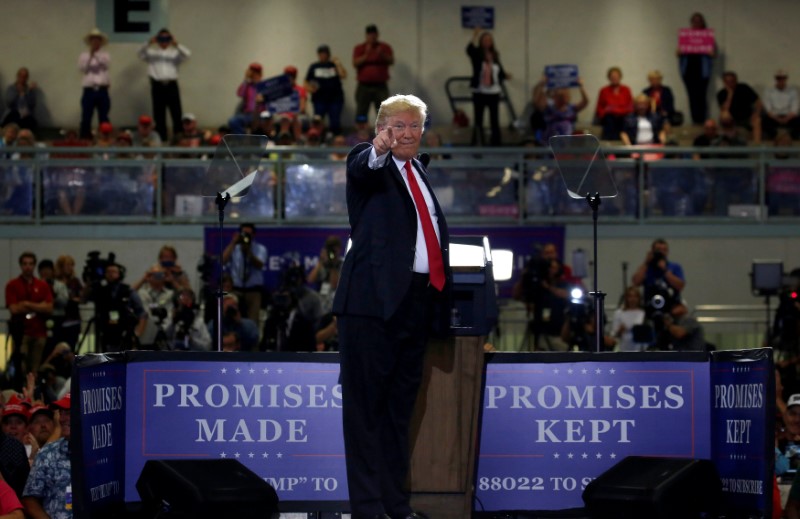 The United States and China exchanged the first salvos in what could become a protracted trade war on Friday, slapping tariffs on $34 billion worth of each others’ goods and giving no sign of willingness to start talks aimed at a reaching a truce.

Duties on a range of Chinese goods imported into the United States took effect on Friday and were immediately countered by measures from China, with Beijing accusing the United States of triggering the “largest-scale trade war”.

The escalating fight between the world’s two biggest economies meant that it could “take economic and political pain to get these two parties to the (negotiating) table”, said Scott Kennedy, head of China studies at the Center for Strategic and International Studies in Washington.

President Donald Trump is already threatening additional rounds of tariffs, possibly targeting more than $500 billion worth of Chinese goods - roughly the total amount of US imports from China last year.

It will take weeks or months for the US Trade Representative to review and possibly activate any new rounds of punishment.

“The key questions during that time are what will happen to financial markets, how will U.S. voters react and will China’s economy start to wobble,” Kennedy said in a telephone interview.

Erin Ennis, senior vice president of the US China Business Council, said there was a danger the two sides will dig in on trade sanctions without a clear strategy for resuming negotiations.

While US companies doing business in China agree with Trump’s complaint about Chinese intellectual property practices, Ennis said they do not see tariffs pushing China into submission.

China’s commerce ministry said it was forced to retaliate, meaning imported US goods including cars, soybeans, and lobsters also faced 25 per cent tariffs.

Some of Trump’s fellow Republicans in the US Congress lashed out at his actions.

“Tariffs not only hurt our farmers, ranchers and airplane manufacturers, but they also harm every American consumer. We should be working with our allies to isolate China rather than escalate a trade war,” said Senator Jerry Moran, who represents the agriculture-heavy state of Kansas.

China’s soymeal futures fell more than 2.0 per cent on Friday afternoon before recovering most of those losses amid initial market confusion over whether Beijing had actually implemented the tariffs, which it later confirmed it had.

For example, US-based audio company Sonos Inc noted in an initial public offering on Friday its performance “may be materially harmed” by trade restrictions.

“Trade war is never a solution,” Chinese Premier Li Keqiang said at a news briefing with Bulgarian Prime Minister Boyko Borissov in Sofia before a summit with 16 central and easternEuropean countries.

“China would never start a trade war but if any party resorts to an increase of tariffs, then China will take measures in response to protect development interests,” he said.

There was no sign of renewed negotiations between US and Chinese officials in the run-up to Friday, business sources in Washington and Beijing said.

The dispute has roiled financial markets including stocks, currencies and the global trade of commodities from soybeans to coal in recent weeks.

China lodged a case with the World Trade Organization against the United States, its commerce ministry said on Friday.

White House Council of Economic Advisers Chairman KevinHassett said in an interview on Fox Business Network on Friday Trump is “going to deliver better (trade) deals”. He said that, for now, “he’s called the bluff of other countries that have basically been abusing” U.S. companies and workers.

Importers of American retail goods hit by higher Chinese duties were reluctant to pass the costs on to consumers for now.

An analysis of more than four dozen targeted US products showed that prices were little changed on Friday afternoon from earlier in the week. The products, sold on Chinese e-commerce platforms, ranged from pet food to mixed nuts and whiskey.

Ford Motor Co said on Thursday that, for now, it will not hike prices of imported Ford and higher-margin luxury Lincoln models in China. However, German automaker BMW said it is unable to “completely absorb” new Chinese tariff on imported US-made models and will raise prices.

US stocks shook off the tariffs, which investors said had been well-anticipated and priced in. The S&P 500 rose to a two-week high on Friday, partly buoyed by strong US jobs growth. However, investors said a significant escalation intension would cause worries to set in.

Companies seeking product exclusions from tariffs on Chinese goods imported into the United States will get 90 days to file such requests, the US Trade Representative’s office said on Friday.

Chinese state media slammed Trump’s trade policies and on Friday likened his administration to a “gang of hoodlums”.

China’s commerce ministry called the US actions “a violation of world trade rules” and said it had “initiated the largest-scale trade war in economic history”.

Trump has railed against Beijing for intellectual property theft, barriers to entry for US businesses and a $375 billion US trade deficit with China, Reuters reported.

A China central bank adviser said the planned US import tariffs on $50 billion worth of Chinese goods - $34 billion plus a planned follow-on list worth $16 billion - would cut China’s economic growth by 0.2 percentage points, the official Xinhua news agency reported on Friday.

China’s tariff list is heavy on agricultural goods such as soybeans, sorghum and cotton, threatening US farmers in states that backed Trump in the 2016 US election, such as Texas and Iowa.