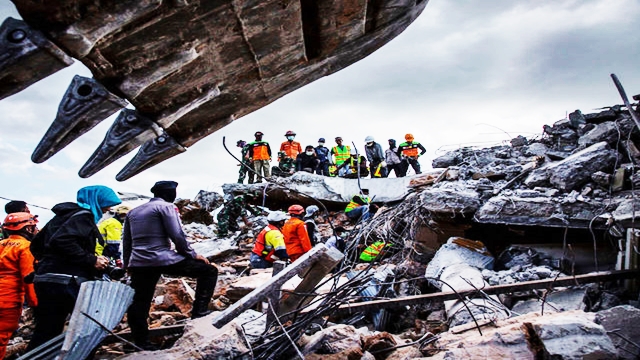 The death toll from Sunday's devastating earthquake on the Indonesian island of Lombok has risen to 347, according to the state-run Antara news agency.

The majority of people died in Kayangan, on the north side of the island, Antara reported. Another 1,447 people were injured and 165,003 were displaced by the 6.9-magnitude quake, National Disaster Management Agency spokesman Sutopo Purwo Nugroho told the news agency earlier.

Around 200,000 people live in northern Lombok, a mountainous region, according to the 2010 census. On Tuesday, the government estimated 20,000 people are in need of assistance, with around 80% of buildings destroyed, as aid workers struggled to reach those affected by the disaster.

"We are concerned aid trucks can't get through because of the debris, and there are also landslides happening," Husni Husni, a Jarkarta-based representative for the Red Cross, told CNN.

"A lot of people are displaced, and many have migrated to the hilly and mountainous areas because of fear of a tsunami."

Sumati, 27, lives in Dangiang village in Kayangan. She had recently given birth when the quake hit. With her newborn in her arms, she fled outside as the walls of her home began to shake violently.

"After the quake happened, I ran to get my child. At the time, the electricity was out, but it came back on, so I took my child with me and went outside to save us from the rubble. And thank God I could be saved," she recounted.

Sumati has been staying at a makeshift evacuation center with her husband and baby. She said they can't do much but wait for support from local authorities.

"I now stay in the evacuation spot. It's cold at night and very hot during the day," she said. "At nighttime, I need Pamper (diapers). ... I'm worried my child will get sick. The health center did not give (the baby) a full bill of health, so I'm very worried. We need help here."

Meanwhile, the Red Cross said Tuesday all of the 2,000 tourists on the Gili Islands had now been evacuated.

Dramatic video tweeted by authorities showed hundreds of people, many believed to be foreign vacationers, crammed onto a beach on the island of Gili Trawangan as evacuation measures got underway.

Emergency personnel raced to evacuate tourists from the three small islands, famous for their white sandy beaches and clear waters, which are near the epicenter of the quake on Lombok.

For residents of Lombok and surrounding islands, many saw their homes destroyed, with the collapse of roofs and walls causing the majority of casualties from the quake.

Gusti Lanang Wisnuwandana, an official with the Mataram Search and Relief Office, told Antara that medical and rescue workers were struggling to deal with survivors terrified of being indoors after the quake.

"They are still traumatized. Most of them are not willing to stay in the building while they are undergoing (an) operation or after they have undergone (an) operation. They want to be treated outdoors," he said, adding that search and rescue work was still ongoing.

"Today, we managed to find one dead victim buried under the rubble of a building in Sigar Penjalin village."