Ten people on board Emirates treated in New York hospital 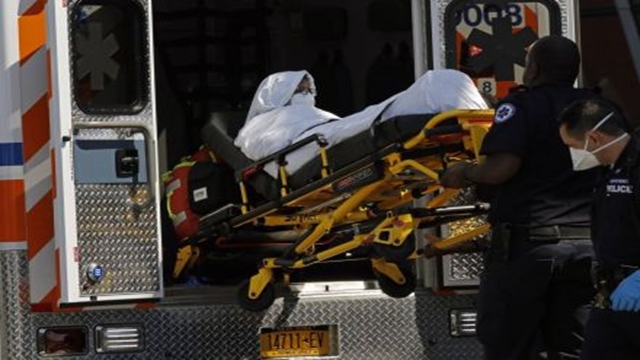 Ten people on board a 14-hour Emirates flight from Dubai were taken to hospital in New York on Wednesday after US health authorities mobilized to meet the jet ferrying sick passengers.

It came after more than a hundred of the 521 people on board had presented with symptoms ranging from coughing to fever and vomiting.

Images of the double-decker A380 aircraft isolated on the tarmac at John F. Kennedy International Airport were posted on social media, including by rapper Vanilla Ice who was also on the plane.

They showed ambulances lined up on the tarmac next to the A380, the largest passenger airliner in the world.

“So I just landed from Dubai and now there is like tons of ambulances and fire trucks and police all over the place,” he tweeted.

Emirates confirmed that three passengers and seven crew were transferred to hospital for “further medical care and evaluation.”

“All passengers were screened by the local health authorities prior to disembarkation,” it said. Nine passengers underwent additional medical screening on site before being released, it added.

Eric Phillips, spokesman for New York Mayor Bill de Blasio, said it appeared that some of the ill passengers had come from Mecca, which is experiencing a flu outbreak.

“Health officials are processing tests now to determine the cause. Symptoms still pointing to the flu,” he tweeted.

Oxiris Barbot, the city’s acting health commissioner, added the results of the tests were expected later at night.

In a statement, the Port Authority of New York and New Jersey said that Emirates flight 203 landed at 9:12 am (1312 GMT) “with a report of multiple sick passengers.”

“The plane was taken to a location away from the terminal so that medical personnel from the US Centers for Disease Control and Prevention could board the aircraft to evaluate the situation and provide immediate assistance,” it added.

Emirates announced that the return flight to Dubai, EK204, would be delayed by approximately three hours.