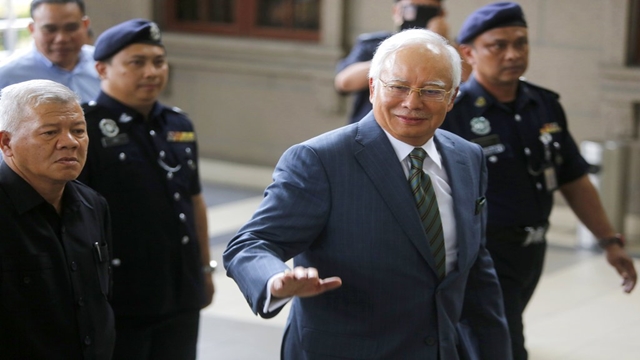 Najib was detained by the anti-graft agency Wednesday over the transfer of $681 million into his bank account and was expected in court later Thursday. Najib, who has since been transferred into police custody, has called the case political vengeance.

Najib will also face several charges under Section 23 of the Malaysian Anti-Corruption Commission Act, according to the anti-graft agency. It didn't give details, but the section deals with the abuse of power.

Najib was earlier charged with multiple counts of criminal breach of trust, corruption and money laundering over the scandal at the 1MDB fund, just months after his shocking electoral defeat. He has pleaded not guilty and his trial is due to start next year.

Najib set up 1MDB when he took power in 2009 to promote economic development, but the fund amassed billions in debts and is being investigated in the U.S. and several other countries for alleged cross-border embezzlement and money laundering.

The 1MDB scandal first broke in 2015 when leaked documents showed that $681 million was transferred into Najib's bank account, leading to massive street rallies calling on him to resign. Najib fired critics in his government, including a deputy prime minister and the attorney-general, and muzzled the media to try to survive the fallout.

A new attorney-general cleared Najib in January 2016, saying it was a political donation from Saudi Arabia's royal family and most of it had been returned — an explanation that was met with widespread skepticism.

U.S investigators say Najib's associates stole and laundered $4.5 billion from the fund, some of which landed in Najib's bank account. Public anger over the 1MDB scandal eventually led to the ouster of Najib's long-ruling coalition in May 9 polls and ushered in the first change of power since Malaysia's independence from Britain in 1957.

The new government reopened investigations stifled under Najib's rule and barred him and his wife from leaving the country. Police also seized jewelry and hundreds of handbags and other valuables estimated at more than 1.1 billion ringgit ($273 million) from properties linked to Najib.

Police have said investigations show that $972 million had been transferred to Najib's bank account from three companies linked to 1MDB.

Najib, 65, has accused Malaysia's new government under Prime Minister Mahathir Mohamad of seeking political vengeance and vowed to clear his name at his trial.