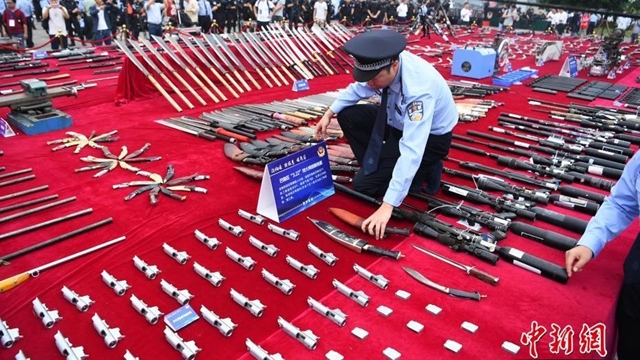 Chinese police have solved more than 33,000 cases involving guns and explosives since a campaign against such crimes was staged across the country in February.

Over 140,000 illegal guns and a large number of explosives confiscated or
turned over to the police were destroyed on Thursday in 146 cities, including
Chongqing, Qiqihar, Nanjing, Wuhan, Guangzhou and Kunming.

During the first seven months of the two-year campaign, the police have
caught 288 gangs involved in guns and explosives, busted 421 criminal dens
and arrested a large number of suspects.

The number of gun and explosives crimes from January to August dropped 30.5
percent and 36.1 percent year on year respectively.

Possession of guns by private individuals is illegal in China. The country
has long maintained high pressure on gun and explosives crime. The campaign
aims to raise public awareness of the illegal possession of guns and
explosives and its threat to public security.

According to Sun Lijun, deputy minister of public security, the crackdown
on gun and explosives crimes have been effective but severe challenges still
remain.

Sun urged all police departments to maintain high pressure on such crimes.