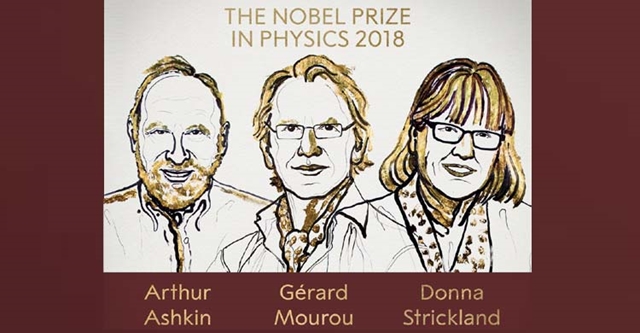 Three scientists have won the 2018 Nobel prize in physics for breakthroughs on high intensity lasers.

Arthur Ashkin from the United States, Gérard Mourou from France, and Donna Strickland from Canada will share the 9m Swedish kronor (£770,000) prize announced by the Royal Swedish Academy of Sciences in Stockholm on Tuesday.

Ashkin wins half of the prize for his development of optical tweezers which have allowed tiny organisms to be handled with light beams.

Mourou and Strickland share a quarter of the prize each for their method of generating high-intensity, ultra-short optical pulses, the Nobel committee said.

Strickland, at the University of Waterloo in Ontario, becomes the first woman to win the physics Nobel since Maria Goeppert Mayer was honoured in 1963 for her work on the nuclear shell structure. Strickland is only the third woman in history to win the physics prize.

“We need to celebrate women physicists because we are out there, and hopefully in time it’ll start to move forward at a faster rate. I’m honoured to be one of those women,” Strickland said in a telephone interview with the committee.

Ashkin told the Nobel committee that he may not be able to give any interviews because “he is very busy with his latest paper.”

On Monday, James Allison at Texas MD Anderson Cancer Center in Houston and Tasuku Honjo at the University of Kyoto won the 2018 medicine Nobel for their work on harnessing the immune system to combat cancer.