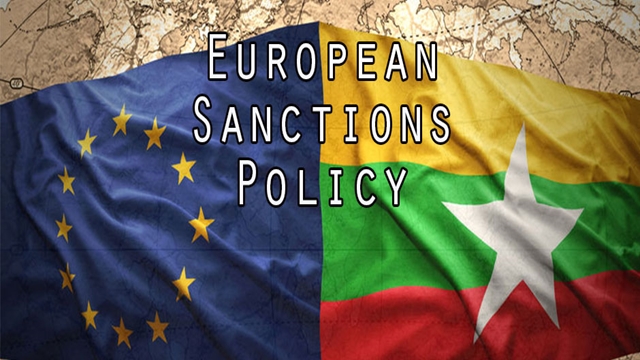 Foreign ministers meeting in Brussels asked the EU's foreign policy chief, Federica Mogherini, to draw up a list of names to be hit with EU travel bans and asset freezes.

In a statement, ministers called for "targeted restrictive measures against senior military officers of the Myanmar armed forces responsible for serious and systematic human rights violations without delay".

The measures would be the EU's toughest yet to try to hold the Myanmar military accountable for the abuses, likely joining US and Canadian sanctions already in place.

Foreign ministers also want to strengthen the bloc's 1990s-era arms embargo on the Southeast Asian country that remains in place, although they did not give details.

Several media investigations highlighted the killing of Rohingya Muslim men who were buried in a mass grave in Rakhine state after being hacked to death or shot by ethnic Rakhine Buddhist neighbours and soldiers.

No names of generals to be targeted for sanctions have been yet discussed, two diplomats said, but the United States said in December it was sanctioning Major General Maung Maung Soe, who is accused of a crackdown on the Rohingya minority in Rakhine.

One EU diplomat said the EU's list was likely to include more than just one senior military officer.

The EU's decision to consider sanctions reflects resistance to such measures in the UN Security Council, where veto-wielding powers Russia and China said this month they believe the situation in Rakhine was stable and under control.

The United States, as well as United Nations, have described the military crackdown in Myanmar as "ethnic cleansing". More than 680,000 people, mostly Rohingya, have fled Rakhine for shelter over the border in Bangladesh, the EU said.

Myanmar has denied most allegations of abuses and asked for more evidence of abuses, while denying independent journalists, human rights monitors and UN-appointed investigators access to the conflict zone.

Myanmar has bulldozed the remains of Rohingya Muslim villages to make way for refugee resettlement, not to destroy evidence of atrocities, an official leading reconstruction efforts in the troubled northern state of Rakhine said yesterday.

Last week, New York-based Human Rights Watch said it had analysed satellite imagery showing Myanmar had flattened at least 55 villages in Rakhine, including two that appeared to be intact before heavy machinery arrived.

The group said the demolitions could have erased evidence of atrocities by security forces in what the United Nations and the United States have called an ethnic cleansing campaign against the stateless Rohingya minority.

A military crackdown prompted by Rohingya insurgents' attacks on 30 police posts and an army base on August 25 drove 688,000 people from their villages and across the border into Bangladesh, many of them recounting killings, rape and arson by Myanmar soldiers and police.

Myanmar has denied most allegations and asked for more evidence of abuses, while denying independent journalists, human rights monitors and UN-appointed investigators access to the conflict zone.

Veteran economist Aung Tun Thet, who is the chairman of the body, said villages were being bulldozed to make it easier for the government to resettle refugees as near as possible to their former homes.

"There's no desire to get rid of the so-called evidence," he told reporters yesterday, responding to the allegations of demolition of evidence.

"What we have intended (is) to ensure that the buildings for the people that return can be easily built," he added.

Aung Tun Thet also said Myanmar would do its best to make sure repatriation under an agreement signed with Bangladesh in November would be "fair, dignified and safe".

In a speech to the Human Rights Council in Geneva, United Nations Secretary General Antonio Guterres restated his call for Myanmar to "ensure unfettered humanitarian access in Rakhine State".

The United Nations suspended activities in northern Rakhine and evacuated non-critical staff after the government suggested it had supported Rohingya insurgents last year. The UN refugee agency has been excluded from the repatriation process.