ASI stabbed to death in Brahmanbaria 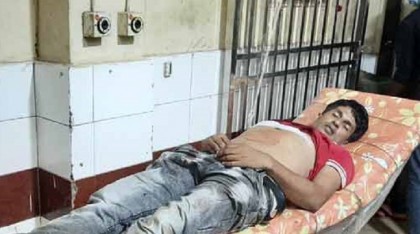 An ASI of police stabbed to death and another one injured while chasing an accused in Brahmanbaria on Friday afternoon.

The deceased was identified as Amir Hossen, 35 and the injured one is ASI Mani Shankar Chakma.

The incident took place at Chandpur Bazar in Machihata Union of Brahmanbaria around 5 pm on Friday.

The deceased Amir Hossain, 35, was the son of Montaz Ali of Diarchar village in Mymensingh district. He was working as a police ASI at Brahmanbaria Sadar Model Police Station.

ASI Mani Shankar Chakma is being treated at the district's sadar hospital.

According to police sources, ASI Amir Hossain along with his colleague Mani Shankar went to arrest Mamun Mia, son of Musa Mia of Chandpur village in Machihata Union.

During the drive, the accused Mamun Mia attacked Amir and Mani Shankar with sharp weapons.

Amir was taken to the district's sadar hospital in critical condition where the duty doctor declared him dead.

ABM Musa, doctor of the district's sadar hospital said ASI Amir died before he was brought to the hospital. He has bruises on both sides of his chest. The ASI died of excessive internal bleeding.

Brahmanbaria Sadar Model Police Station Inspector (Investigation) Muhammad Shahjahan said, "ASI Amir died due to a sudden stabbing during the operation. Attempts are being made to arrest the accused."