Climate refugees to get new homes in Cox's Bazar 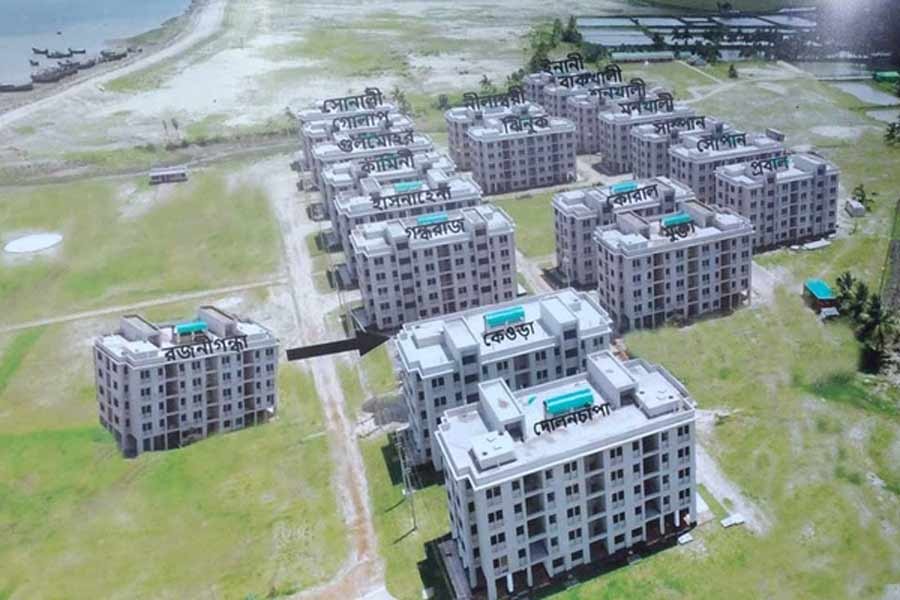 Yusuf Zaman is about to enter a new phase in his life. He lost his home in the devastating cyclone in 1991 and took refuge in a slum near Cox’s Bazar’s airport with thousands of others.

After living under a thatched roof with his wife and children for almost three decades, Yusuf will move into his apartment on Thursday.

For Jahanara Begum, a mother of four, leaving the poverty of a slum for a modern apartment complex is like a ‘dream come true’.

She, too, is set to receive her flat along with at least 600 families rendered homeless by the effects of climate change. The programme will be launched by Prime Minister Sheikh Hasina.

The Bishesh Asrayan Prakalpa, a special project, sprawls across 250 acres of land on the banks of the Bakkhali River, 3 km away from Cox's Bazar.

At least 139 multi-storey buildings are being constructed in four zones, which will house 4,409 families who are living as climate refugees in Fadnar Dale, Kutubdia Para and Samity Para near Cox's Bazar airport.

All of these people lost their homes in the severe cyclone of 1991.

This is the biggest housing project in the country and the first one for victims of climate change, according to Project Director Md Mahbub Hossain.

“We can say this is the largest rehabilitation programme for climate victims in the world. Projects like this are rarely seen anywhere in the world.”

Ban Ki-moon, chairman of the Global Commission on Adaptation Chairman, has also toured the project site, he added.

Bangladesh has become a focal point of discussions in different global platforms as a country that is mainly affected by climate change.

The South Asian nation has drafted a strategy to fight the adverse effects of climate as well as forming a government trust fund.

During a visit to the site on Tuesday, FT Team found that construction work on 19 buildings is nearing completion while one is almost done. Each of the five-storey units boasts 32 apartments.

Construction is currently in full swing with a wide road connecting the project to the city while the streets inside are also ready.

A pond has also been dug inside the project with a seven-metre high dam standing between it and the river as a shield from tidal surges.

The buildings have been named by the prime minister herself as ‘Inani’, ‘Bakkhali’, ‘Sampan’, ‘Jhinuk’ and ‘Coral’, among others, the project director said.

Upon completion in 2023, the Tk 18 billion project will not only house 4,409 families but also have a tourist zone with ‘modern’ facilities, including a dry fish sales centre.

The recipients of apartments under the housing project are mostly fishermen, with very few from other professions. Yusuf Zaman rears cattle to earn his living and plans to continue that after moving into his own apartment.

As part of the rehabilitation scheme, the authorities plan to provide loans and training to the inhabitants to make them economically independent, said Mahbub.

It is in line with Hasina’s pledge to eliminate homelessness in the country.

Many families lost their homes in Cox’s Bazar and nearby areas following the cyclone on May 19, 1997. The first ‘Asrayan’ project was designed after Sheikh Hasina visited the areas and ordered the rehabilitation of the victims.

The Asrayan-2 project began in 2010 and provided shelter to 319,140 landless and homeless people.

Previous shelter centres had been constructed as barracks in contrast to the multi-storey apartments under the latest project.

“The families will receive the apartment for a token price of Tk 1,001,” said Mahbub.

Each 456 square-feet apartment will have utility services like gas, water, electricity supplies. A fire station and police outpost will be set up in the project area. Each building will also have a solar panel on its roof.

The armed forces will construct the 119 buildings through DPP, said the project director.

To keep the project safe, the building units are being constructed on elevated land while no apartment lies on the ground floor, said Area Commander Md Moinullah Chowdhury.

“There is no chance of the area getting flooded,” he said.

“At least 10 deep tube-wells have been set up alongside two ponds for water supply. A school has also been constructed in the project.”

The list of 4,409 families was made in 2012 during the expansion of Cox’s Bazar Airport, said Deputy Commissioner Kamal Hossain.

The government has formed a committee headed by the DC for the maintenance of the project.