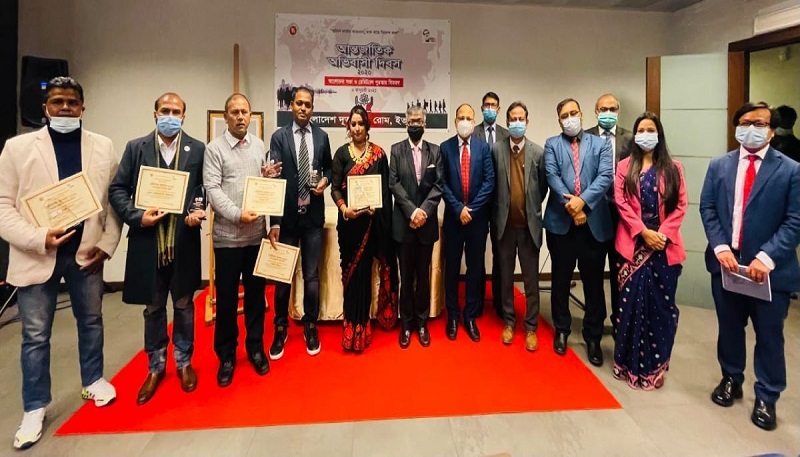 The Embassy of Bangladesh in Rome, Italy has honoured five expatriate Bangladeshis and a business organisation with “Remittance Award".

Meanwhile, Bangla SRL has won the Award in the 'organization category'.

They received the award as the top remittance senders to Bangladesh from Italy between July 2019-June 2020.

Md. Shameem Ahsan, Bangladesh Ambassador to Italy, handed over the awards among the recipients.

The event was held on Thursday on the occasion of “International Migrants Day 2020”.

Bangladesh Embassy in Rome launched "Remittance Award" in 2019 to encourage and promote remittances to Bangladesh through legal channels, said the Embassy on Sunday.

The International Migrants Day, which falls on 18 December, could not be organised on the designated day due to unavoidable reasons.

Officers and officials of the Mission and awardees were present at the event.

In view of the severity of covid-19 pandemic in Italy, the programme was organised in an in-house setting with the minimum presence in compliance with the strict Health Advisory of the host country.

Messages of the President, the Prime Minister, the Foreign Minister and the Minister of Expatriates’ Welfare and Overseas Employment were read out.

At the beginning of the discussion session, Md. Arfanul Haque, Counselor (Labor Welfare) of the Embassy made a presentation on various activities undertaken by the Government of Bangladesh for the protection of the rights of expatriates, their welfare and to encourage sending more remittances through legal channels.

The awardees also spoke and sincerely thanked the Embassy for the recognition.

Ambassador Ahsan warmly congratulated all the awardees while acknowledging the significant contribution being made by the Bangladesh Diaspora for the buoyancy of the economy of the country by sending valuable remittances.

While paying deep tribute to the Father of the Nation Bangabandhu Sheikh Mujibur Rahman, he said that the present government is an expatriate-friendly government and highlighted the major steps taken by the present Government in the context of the slogan of the Mujib Year.

Ahsan mentioned that during the Covid-19 pandemic, Bangladesh nationals who were stranded in different countries were brought back to the country and financial assistance was provided by the government to those who lost their jobs.

The Ambassador added that the Embassy was working hard to solve problems relating to passports and improve the quality of service delivery.