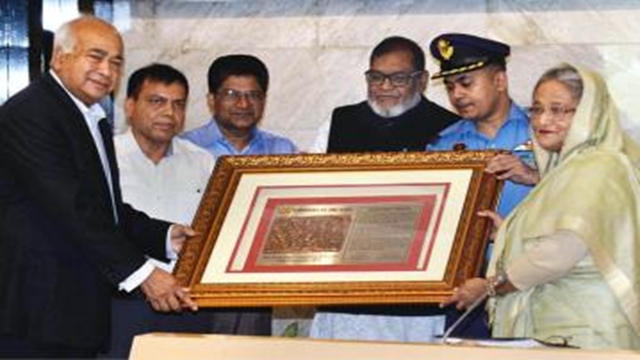 Prime Minister Sheikh Hasina on Monday received a replica presented by Indian Eastern Command on surrender of Pakistan Army in Dhaka on December 16, 1971.

Housing and Public Works Minister Engineer Mosharraf Hossain handed over the replica to the Prime Minister.

Commander of the Eastern Command Lieutenant General Abhay Krishna gave the replica to the minister at a reception at Fort William in Kolkata in December, 2017 last marking Victory Day of Bangladesh.

Cabinet Secretary Md. Shafiul Alam said the housing minister handed over the replica to the Prime Minister at the beginning of the weekly cabinet meeting at Prime Minister's Office (PMO).

Ahead of the cabinet meeting, Post and Telecommunications Minister Mustafa Jabbar also handed over the 'Open Group 2018 Awards for Innovation and Excellence' to Prime Minister Sheikh Hasina.

The Open Group, an international forum based in Bangalore, India, gave the award to Bangladesh Computer Council (BCC) at a program on February 28, 2018 for innovation of the national enterprise architecture to provide government services and information from a single platform.

State Minister for Power Nasrul Hamid also handed over the 'Visionary Leader of Change Award" to the Prime Minister which he received from World HRD Congress at a function at Mumbai on February 15, 2018 for her visionary, positive and creative work to the society.