A tale of Magical change of Naria

This is a story of magical change of an unprivileged area name
“Naria”. Naria a adjacent area by river Padma. Some days ago the river treated as the woo of Naria. But
now days the same river turned as the wind of wealth and happiness to the inhabitant of Naria. What
the meth that bring the happiness? 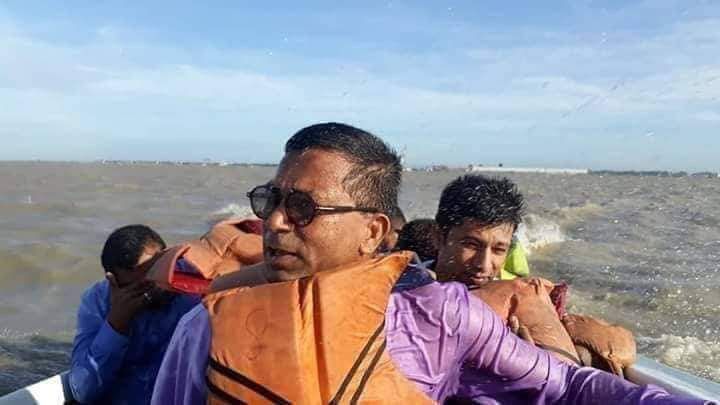 yes! that tale of the Padma bridge aside by the strong built of embankment on the river. Naria is a
upajilla of Shariat pur dristict. The padma bridge and embankment brings the radicale changes The
standard of living of the people. The embankments under construction on both banks of the river Padma
are so strong and sustainable. Fragmentation is the main driver of change in this region. And the man
behind this remarkable change is AKM Enamul Haque Shamim, Hon&#39;ble Member of Parliament for
Shariatpur-2 constituency and current Deputy Minister for Water Resources.
A memory still haunts Enamul Haque Shamim. At the time of the first week of
September 2017. On behalf of Begum Ashrafunnesa Foundation (Minister&#39;s
mother&#39;s name) he has to stand by the side of helpless river broken people.
With the risk of his life, he set off in a Speed boat on the turbulent Padma. The
waves almost drowned him that day! Surviving by the grace of Allah, he has
been looking for a way to prevent the breakage of the Padma since that day.
Due to his dedicated efforts, a dam has been built to prevent the breakage of
the Padma. Which is changing the life picture of Naria -Jazira. ( Shamim pic
will added)

Naria’s vast area is sinking in the terrible clutches of Padma. The people of the surrounding villages
woke up to the screams and wails of helpless children and men and women at the sound of breaking.
AKM Enamul Haque Shamim, then organizing secretary of the Awami League, moved the hearts of the
helpless people whose houses were destroyed in the riverbed. Born in the char region and raised on the
banks of the Padma, this masterpiece of Shariatpur conveyed the message of the helpless people
affected by the erosion of the Padma in Naria to Hon&#39;ble Prime Minister Sheikh Hasina. Bangabandhu&#39;s

daughter Sheikh Hasina became sympathetic when she heard about the plight of the people on the
banks of the Padma in the face of Enamul Haque Shamim. He took swift action to protect the char areas
of Sureshwar, Kedarpur, Bashtala, Mulfatganj and Moktar, including the heavily eroded Naria town.
Thanks to the tireless efforts of AKM Enamul Haque Shamim and the grace of the Hon&#39;ble Prime
Minister, on January 2, 2018, the ECNEC passed a historic project, which is the &#39;Right Shore Protection
Project of Jajira and Naria Upazilas of Shariatpur District&#39;.
The project costing around Tk. 11 billion has already been revised and the current cost has increased to
Tk. 14 billion. The progress of the project is about 71%. If the project is fully implemented, various public
and private resources including houses, roads, markets and crop lands of the area will be protected from
river erosion by conserving the banks of the river Padma.
It will also improve the socio-economic condition of the region as well as maintain the natural balance
and protect the local people from floods. 306.99 lakh cubic meters of dredging will normalize river flow
and maintain main channels and play a major role in maintaining regional and natural stability. Will
observe.

The picture of Sureshwar, Kedarpur, Mulfatganj and Banshtala, which have already been damaged, has
almost completely changed. The area is now a safe haven. Various business establishments and one-
storey / multi-storey buildings and permanent installations are being set up there. Gradually the area
has turned into a tourist center. Various restaurants have been set up there and preparations are being
made to set up hotel motels. Hundreds of people are coming from far and wide every day fascinated by
the beauty of the banks of the Padma Dam.
Meanwhile, under the direction of Prime Minister Sheikh Hasina, work on the mega project is
progressing at a fast face on the initiative of Deputy Minister for Water Resources Enamul Haque
Shamim. Construction of CC block is in full swing at 10 places of Padma river in Naria. Local people told
to the investor not a single house was demolished this year due to such dynamic initiatives.&quot;We feel
much safer now than ever before, with the construction of the embankment improving business
conditions,&quot; said a tea shopkeeper near the Naria launch ghat.
Mr. Hazrat Ali Mia, Retired Headmaster of the local Naria Biharilal High School, said, &quot;We are now very
relieved with the implementation of the embankment and the remarks initiative has saved the Naria
region from further catastrophic erosion and is a significant example of the government building
barricades to protect against natural disasters.&quot;
Naria Municipality Mayor Abul Kalam Azad said, &quot;The construction of the embankment has made the
dreams of thousands of people come true.&quot;
Jafar Sheikh, Municipal Councilor of Ward No. 2, which was partially demolished in the Padma, said the
embankment was much needed to protect Naria Upazila and the implementation of the embankment
has brought about a magical changes in the socio-economic condition of the region.
Monir Hossain, a resident of Banshtala on the banks of the Padma River and an official of Rupali Bank,
said, &quot;The embankment has saved us from an extreme uncertainty and we are finally breathing a sigh of
relief.&quot;

Shariatpur Hon&#39;ble Member of Parliament and Deputy Minister AKM Enamul Haque Shamim has
undertaken mega development projects including prevention of river erosion for 50 years for the
development of Naria and Sakhipur.

Deputy Minister for Water Resources AKM Enamul Haque Shamim said, “Not a single house has been
demolished in Naria this year due to the implementation of the right bank protection project of Padma
on the instructions of Hon&#39;ble Prime Minister Sheikh Hasina. &#39;&#39;

He further said that Hon&#39;ble Prime Minister thinks about the future generation. Deputy Minister Enamul
Haque Shamim has expressed concern that if Delta Plan 2100 is implemented in the future, it will be
possible to prevent river erosion permanently across the country.