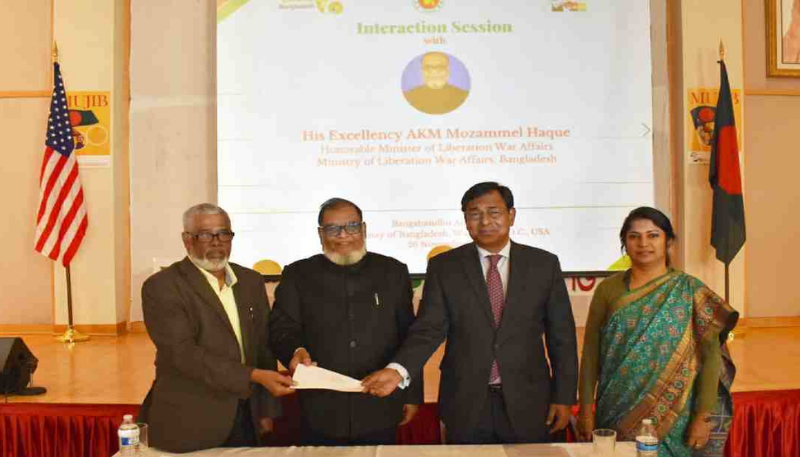 Liberation War Affairs Minister AKM Mozammel Haque has emphasized on upholding the spirit of the Liberation War while pursuing the national interests of Bangladesh.

He was speaking at an interaction session with the officials of the Embassy of Bangladesh in Washington, DC on Friday.

Bangladesh Ambassador to the United States Shahidul Islam presided over the session.

Minister Mozammel Haque elaborated the long history of struggles by the people of then East Pakistan and highlighted the leadership role of the Father of the Nation Bangabandhu Sheikh Mujibur Rahman in all phases of struggle, which ultimately led to the emergence of an independent Bangladesh.

He recalled Bangabandhu’s great statesmanship and diplomatic acumen in positioning the newly independent Bangladesh as a sovereign, peace-loving, non-aligned country in the global arena.

The Minister also highlighted various initiatives and measures undertaken by the Government of Prime Minister Sheikh Hasina to ensure the welfare of the freedom fighters and their family members.

Ambassador Shahidul Islam paid deep homage to the Father of the Nation and recalled Bangabandhu’s great leadership roles in every struggle of the Bengalee nation.

The Ambassador provided a brief account of the Embassy’s engagements with the Bangladeshi diaspora to enhance people-to-people contact between Bangladesh and the USA and also to let the new generation of Bangladeshi Americans know more about the glorious history of Bangladesh’s independence.

Earlier, the Minister for Liberation War Affairs laid a floral wreath at the bust of the Father of the Nation at the Embassy premises.

He also handed over a cheque for gratuity payment to a retired Embassy official Delwar Hossain, a valiant freedom fighter who actively took part in the war of liberation.

Minister AKM Mozammel Haque is currently visiting the USA to attend the FOBANA Conference as the chief guest.