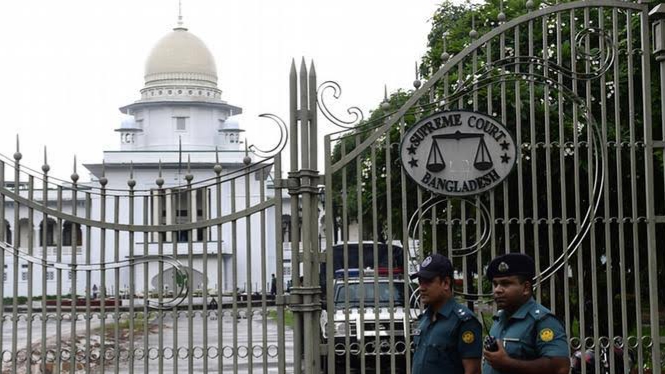 The Supreme Court is set to resume in-person proceedings instead of virtual hearings after one and a half years of suspension due to the coronavirus pandemic.

The benches of the Appellate Division and the High Court Division will return to in-person judicial work on Wednesday, the apex court's Registrar General Md Ali Akbar said in a statement on Monday.

The decision was taken in a meeting headed by Chief Justice Syed Mahmud Hossain.

The judiciary went on leave in March last year, coordinating with the lockdown imposed by the government in a bid to curb the spread of the coronavirus infection across Bangladesh. In a sense, the judiciary was shut down for that period.

On May 9, 2020, an ordinance was issued at the request of the Supreme Court to use information technology in court proceedings such as trials, judicial investigations, appeal hearings, hearing testimonies or arguments and also to ensure the presence of all parties while a court issues an order or announces a verdict.

The Supreme Court issued a practice guidance on May 10 for running the court proceedings using digital platforms like videoconferencing.

The virtual court opened the next day, the first of its kind in the history of Bangladesh’s judiciary.

As the coronavirus pandemic began to ebb, some of the lower courts were opened for in-person court proceedings, following strict health protocols.

Gradually some High Court benches were opened for in-person court proceedings. The virtual court, however, continued to run simultaneously.

The Appellate Division and the Chamber Courts, the top courts in the country, have been running on virtual platforms since then.

In an effort to stop the second wave of the coronavirus pandemic, the government put restrictions on the shopping malls, stores, restaurants and also halted the public transport service from Apr 5 to 11.

Following the order from the judiciary head, the Supreme Court had issued three separate notices on the issue.

Only the Chamber Court and four benches of the High Court were ordered to be open for virtual proceedings from Apr 6, using information technology, according to those notices.

Later, on Apr 13, another decision came to keep the Appellate Division running at a limited scale under a virtual court. The appellate bench led by the chief justice would work from 10 am to 1:15 pm from Jul 18, said a notice issued on the same day.

This was how the top court has conducted trial proceedings in the past few months. Last week, Chief Justice Syed Mahmud Hossain suggested the Supreme Court might resume in-person court proceedings from December.