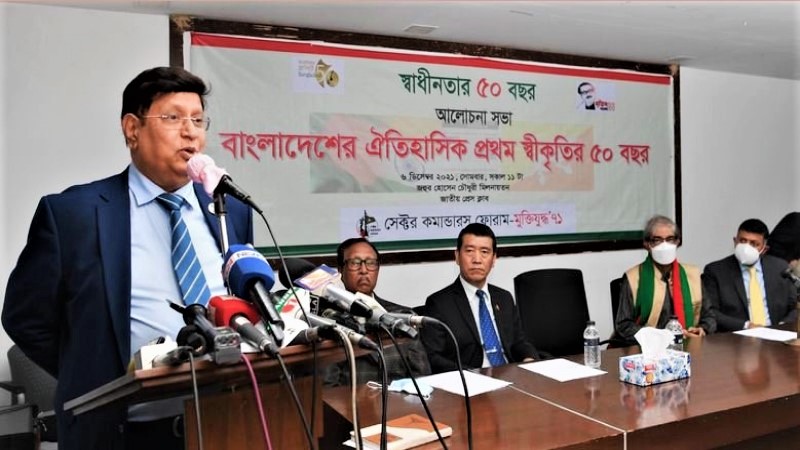 The Foreign Minister profoundly recalled the wholehearted support extended by the people of India and the Indian government during the 1971 Liberation War.

He recalled with utmost respect the Father of the Nation Bangabandhu Sheikh Mujibur Rahman on this historic day.

Dr Momen also remembered the brave freedom fighters of Bangladesh and the Indian soldiers who sacrificed their lives for Bangladesh's Independence in 1971.

Bangladesh and India are celebrating the Maitri Diwas, the historic day when India, as the second country, recognized Bangladesh as a sovereign and independent state in 1971 after Bhutan.

The day has been designated by the Prime Ministers of Bangladesh and India as Bangladesh-India Friendship Day in March 2021.

Speaking as the chief guest at the discussion, Dr Momen said it was not the India-Pakistan war that Pakistan tried to interpret.

“This was a unique decision taken by the then Indian government,” the Foreign Minister said, thanking the Indian Prime Minister, Indira Gandhi, who announced that India recognised the government of Bangladesh.

The Foreign Minister thanked the Bhutanese government which recognized Bangladesh before India.

Dr Momen said the pending issues between the two countries -- Bangladesh-India -- will be resolved through dialogue and discussion.

He sought India’s support to celebrate Maitri Diwas in all Bangladesh Missions abroad jointly in future.

As part of this year’s celebration, the Friendship Day is jointly being commemorated in the capitals of 18 selected countries, including Australia, France, Japan, Malaysia, Saudi Arabia, South Africa, Switzerland, Thailand, the UAE, the USA, Belgium, Canada, Egypt, Indonesia, Russia, Qatar, Singapore and then UK, in addition to the celebrations in Bangladesh and India by the respective diplomatic Missions of the two countries.

The celebrations of Friendship Day coincide with the Golden Jubilee of Bangladesh’s Independence and 50th anniversary of Bangladesh-India friendship.

In most of the cities, Friendship Day is being celebrated today (December 6), as planned. In a few of the cities, the celebrations would be arranged at a later date due to the Covid-19 related restrictions declared by the host governments.

The programme includes an address by the Heads of the Missions of Bangladesh and India, address by the chief guest from the host country, cultural programme, screening of documentary on Bangladesh-India bilateral relations followed by reception showcasing foods of both the countries.

A photography exhibition, depicting the historic relationship between the two countries, while seminars and webinars are also being organized by some Missions as part of the joint celebrations.

Bangladesh and India have taken up yearlong programmes to celebrate the 50th anniversary of diplomatic relations on various other fronts.

Bangladesh and India are committed to further strengthening and consolidating the existing excellent relations that are founded on commonalities of values, culture and legacies based on mutual trust, respect and understanding, said the Ministry of Foreign Affairs.

The joint celebration is the reflection of the will of the people and the leadership of both the countries to work together for the next fifty years and beyond towards attaining a vision of shared prosperity and development, it said.