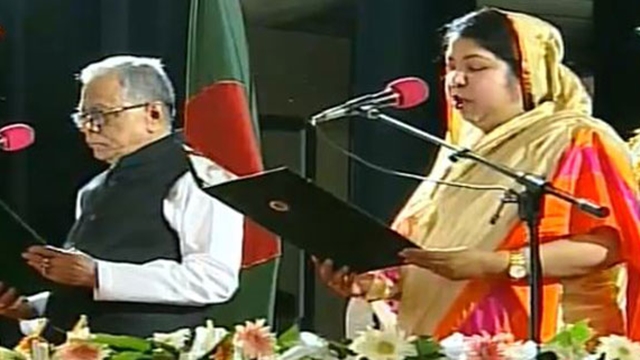 President Abdul Hamid took oath as the head of state for the second consecutive term at a ceremony at Bangabhaban on Tuesday evening.

Jatiya Sangsad Speaker Dr Shirin Sharmin Chaudhury administered his oath of office in the presence of Prime Minister Sheikh Hasina, among other dignitaries, at the Darbar Hall of Bangabhaban in the capital.

The ceremony saw Abdul Hamid signing the oath of office on the Darbar Hall's dais after he was sworn in by the parliamentary speaker while the cabinet secretary conducted the function.

A veteran politician and parliamentarian, Hamid appeared as the country's 21st President, 77 days after the Election Commission declared him elected to the presidency unopposed for the highest office.

He was elected to parliament for seven times since the 1971 independence.

According to the section 7 of President Law 1991, Chief Election Commissioner (CEC) Nurul Huda, also returning officer of the presidential election, on February 7 declared Abdul Hamid as the 21st President of Bangladesh as no other candidate contended for the post.

The Jatya Sangsad elected the country's first president under parliamentary form of government in 1991 but the voting for presidency was redundant in the cases of subsequent presidents since they were elected unopposed.

Former Parliament Speaker Hamid was the lone candidate for the post of presidency being the nominee of the ruling Awami League in 2014 while 16 persons held the position previously for 19 terms.

A Bangabhaban spokesman said Abdul Hamid is the 17th person to serve as the President. Awami League (AL) on January 31 this year nominated him as its candidate which today saw his installation for another term as his five-year tenure expired Monday (April 23).

Abdul Hamid, however, took the responsibility as president-in-charge on March 14, 2013 after President Zillur Rahman fell sick and was flown to Singapore where he breathed his last.

After his predecessor's death, Abdul Hamid became the Acting President on March 20, 2013.

Son of late Hazi Mohammad Tayebuddin and late Tamiza Khatun, Hamid was born in Kamalpur village of Mithamoin Upazila in Kishoreganj on Jan 1, 1944.