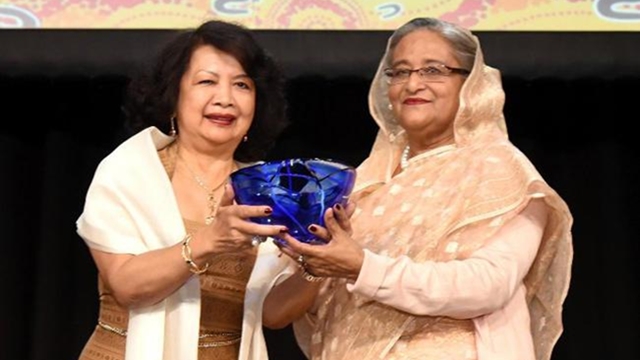 Prime Minister Sheikh Hasina on Friday called for mobilizing a new global alliance to promote women rights and empowerment as she was conferred with Global Women's Leadership Award for her outstanding contribution to their cause.

"We have to forge a new alliance to support the women and uphold their rights. Together, we must act on our shared culture, tradition and values to benefit millions of women in need," she said while receiving the award at a Gala Dinner of the Global Summit of Women 2018.

Sheikh Hasina received the prestigious accolade from Global Summit of Women President Irene Natividad amid thunderous clapping of nearly 1500 women leaders from across the globe who joined the summit.

The women leaders gave a standing ovation to the Bangladesh prime minister for several minutes on the occasion.

The US-based Global Summit of Women conferred the award on Sheikh Hasina for her leadership in women's education and entrepreneurship in Bangladesh.

A video documentary on the political life of Sheikh Hasina, Bangladesh's economic progress and different steps taken by her government for women empowerment was screened earlier.

Prime Minister's younger sister Sheikh Rehana and Foreign Minister AH Mahmood Ali, among others, were present on the occasion.

Sheikh Hasina said: "I am highly glad and deeply honored" to receive the Global Women Leadership Award 2018 and she dedicated it to the women across the world, who have shown their might in changing their lots.

"It is a great pleasure for me to see the women change-makers," the premier said and extended sincere thanks to the Global Summit of Women for nominating her for the prestigious accolade and organizing this gala event.

She urged all to work together to overcome traditional gender stereotypes regarding women's ability and reach out marginal and vulnerable women who were still less fed, not schooled, under-paid and violated.

The premier particularly stressed creating equal opportunities for women in all sectors of life and livelihoods and said no woman and girl should be left behind. She also called for women's enhanced productivity by addressing health hazards specific to women.

Dame Quentin Bryce, a former Governor General of Australia and Andrea Mason, the CEO of Ngaanyatjarra Pitjantjatjara Yunkunytjatjara Women Council of Australia, were also given the Australia's Women's Leadership Award on the occasion.

Summit President Irene Natividad gave an introduction on the awards.

Women in Bangladesh, she said, played significant roles in every nationalist movement beginning from the Language Movement in 1948 to the 1971 Liberation War while the ware claimed the honour of two hundred thousand women.

The premier, however, pointed out the steps in post independence Bangladesh to uphold their dignity and rights saying Bangabandhu established the Women Rehabilitation Centre for the war victims while "we have honored them as 'Birangana'(war heroines)".

Sheikh Hasina said Bangladesh constitution appeared to be the bedrock for women empowerment by providing equal rights to all women with men in all spheres of the state.

"Bangabandhu had made girls education free up to class VIII and preserved 10 percent quota for females in the government jobs," she said.

The prime minister shared her struggle and personal experience in realizing people's rights, particularly women's empowerment in Bangladesh and said she and her sister were prevented from returning home following Bangabandhu's assassination along with 18 family members.

Sheikh Hasina, elder daughter of Bangabandhu, said they survived the massacre as they were abroad at that time but were forced to live in exile for subsequent six years and added that on return home in 1981 she focused on working for economic and political emancipation of the people.

The premier said her party after coming to power in 1996 embarked upon many pragmatic programmes to establish a fair, rights-based, gender sensitive society while the process got momentum as her party was reelected to the office in 2008 and 2014.

"Bangladesh has now emerged as a role model of "women empowerment" and in providing 'agency' to all women," she said.

Sheikh Hasina pointed out that the World Economic Forum in 2017 ranked Bangladesh 47th among 144 countries and first in South Asia for women empowerment.

Simultaneously, she said, the Forum also ranked Bangladesh 7th among 155 countries for political empowerment of women.