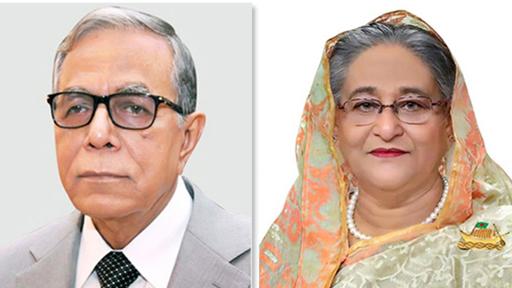 President M Abdul Hamid and Prime Minister Sheikh Hasina paid rich tributes to the memories of the country's National Poet Kazi Nazrul Islam on his 123rd birth anniversary to be observed on Wednesday .

In separate messages, they also prayed for eternal peace of the departed soul of the poet.

In his message, President Abdul Hamid said: "On the occasion of the 123rd birth anniversary of the national poet Kazi Nazrul Islam and the centennial (celebration) of the poem 'Bidrohi', I remember this short-lived poet with utmost respect. Arranging colorful programs in different parts of the country on the occasion of the birth anniversary of this great poet is undoubtedly a commendable initiative."

His colorful career and creative works are the source of inspiration, the head of the state said, adding that the poet's fiery writings speak out for the rights of the exploited and deprived people and teach them to protest against injustice.

The songs and poems of the poet had greatly inspired the freedom-loving people during the War of Liberation, Hamid said.

From his writings, people have been inspired in every democratic movement including anti-British movement, language movement, mass upsurge of 1969 and the Liberation War, Hamid added.

As an expression of deep affection and love for Nazrul, he said, Bangabandhu Sheikh Mujibur Rahman, the father of the nation, brought him and his family to Bangladesh and arranged their permanent living here.

Prime Minister Sheikh Hasina, in her message, said Poet Nazrul, has enriched the literature, music and culture of the country through his writings.

was the first Bengali poet who demanded complete independence of India from British rule.

In his literary works, the message of struggle against subjugation, communalism and imperialism has been uttered, the premier said, adding that possessing an extraordinary and versatile talent, Nazrul was a symbol of secularism and nationalism.

She said the ideologies of Bangabandhu Sheikh Mujibur Rahman and the national poet are the continuation of the same philosophy.

The president and the premier wished the overall success of all the programmes taken on the occasion of the birth anniversary of the national poet.

An elaborate programme has been taken at the national level to mark the day. Different organizations and cultural bodies in the capital and in districts will also celebrate the day amid various functions.

The main programme of the birth anniversary will be organized on the Bir Chandra Public Library and Nagar Auditorium (town hall) premises in Cumilla at 11am tomorrow with the theme "Bidrohir Shotoborsha", where the poet had a lot of memoires and which is the home town of his wife Pramila Devi as well.