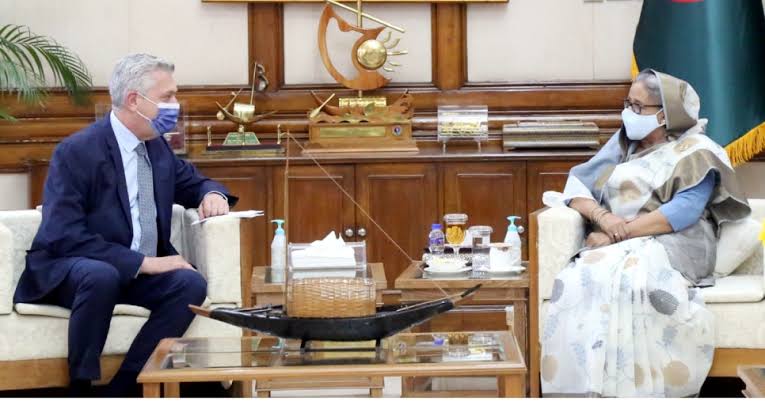 Prime Minister Sheikh Hasina on Tuesday said that Rohingyas refugees in Bangladesh are getting frustrated due to prolonged uncertainty over repatriation to their homeland, Myanmar.

“Such uncertainty has a great potential risk as it entices many to get involved in criminal activities,” she told the visiting United Nations High Commissioner for Refugees Fillippo Grandi who called on her at her official residence Ganabhaban.

The premier said that her government is facilitating informal education following Myanmar’s curriculum and language as well as skill development activities similar to options available in Rakhine state, the home of the Rohingyas.

She said a deep forest in Ukhia, where most of over 1.1 million forcibly displaced Myanmar nationals live, has been destroyed in a big blow to the environment in this southern part of the country.

“They are reducing the forest by cutting trees and thus creating great environmental hazards in the area,” she said.

Hasina said that her government has arranged temporary shelter for the Rohingyas in Bhashan Char Island ensuring all sorts of facilities.

“Our government has developed Bhashan Char with all amenities to temporary shelter 100,000 Rohingyas,” she said.

She said so far 30,000 Rohingyas have been shifted in there.

She also mentioned that each year some 45,000 babies are born in Rohingya camps in Bangladesh.

Grandi echoed the prime minister’s apprehension about the Rohingyas’ getting involved in criminal activities because of uncertainty over their repatriation.

He also said that the world is witnessing growing influx of refugees besides the Rohingyas due to Ukraine war and the Afghanistan situation.

Grandi said that he visited Myanmar and requested the regime to start the repatriation.

“The present regime in Myanmar agreed to start the reparation,” he said adding that “The UNHCR will help in the repatriation process.”

He expressed his gratitude towards the Bangladesh prime minister for hosting such a huge number of forcibly displaced people.