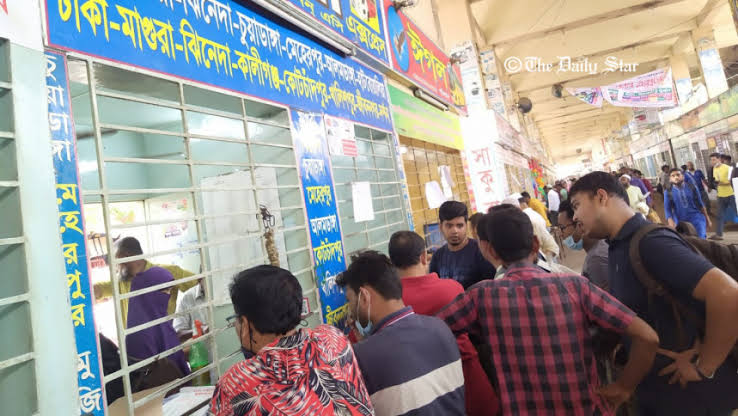 Scores of Dhaka residents who gathered at different long-distance bus terminals in Dhaka to buy tickets ahead of Eid-ul-Azha have returned home empty-handed as the advance tickets for Jul 7 and Jul 8 sold out before lunch.

On Monday, the Bangladesh Bus Truck Owners Association announced it would start selling advance tickets for the Eid journeys from Friday.

According to the decision, tickets for July 8 will be sold on Friday from Gabtoli the Inter-District Bus Terminal and other bus terminals for various routes in north and south-west Bangladesh.

As advertised, most of the coach operators in Gabtoli, Kallyanpur and Shyamoli areas in Dhaka began selling advanced coach tickets on Friday morning, but the crowd dissipated as the ticket counters hung ‘sold out’ notice.

Some simply did not believe it.

“They [coach operators] say it all the time so that they can sell these tickets at a steeper price later on. It’s hard to believe all the tickets for two consecutive days are sold out in a morning,” said Shahriar Hossain, who came to purchase a Joypurhat-bound bus ticket for Jul 7.

Zakir Hossain, a sales representative for a drug company, had been waiting in a queue in front of the counter of SP Paribahan in Kallyanpur since 5:00 am on Friday to buy a ticket for a Naogaon-bound coach on the night of Jul 7.

“I even tried to buy a ticket online, but couldn’t as tickets ran out entirely. Sometimes the operators release some more tickets ahead of Eid. I am hoping to get one of those,” he said.

Md Salam, the manager at the Shyamoli Paribahan counter in Kallyanpur, said demand was extremely high for these two days.

“However, we still have enough tickets for the Jul 6,” he said.

SR Paribahan is one such operator.

Rajib Ahmed, manager at the operator's counter, said the company adopted this measure this year to avoid disorder.

“For years we struggled with the crowd and disarray that ensued during this time. To avoid it, we opted for online sales via shohoz.com this year,” he said.

Abdullah Al Mamun, a ticket seeker who was at the counter said he failed to grab a ticket online.

“That’s why I'm here hoping to manage one,” he said.

However, an official of Hanif Paribahan, one of the largest coach operators in the country, had a different perspective.

In their estimation, coach ticket sales in back-to-back Eid holidays this year are low compared to previous years.

“We expected a huge crowd, but there weren’t many people. We only sold tickets for the Jul 7; the tickets for Jul 8 and 9 are yet to be sold,” said Mosharraf Hossain, the general manager of Hanif.

Bangladeshis are scheduled to celebrate Eid-ul-Azha, the second largest religious festival for the Muslim community, around Jul 10, depending on the sighting of the moon.