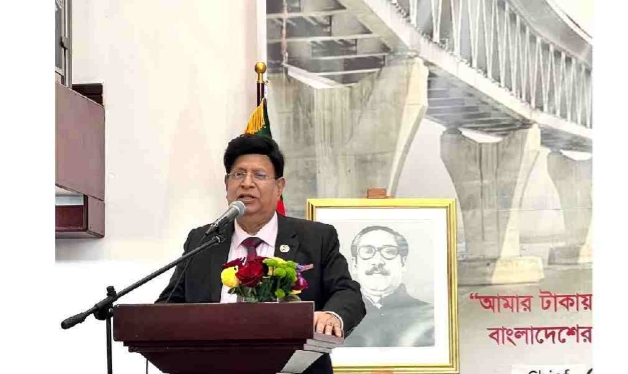 Foreign Minister Dr AK Abdul Momen has asked those who made “false” corruption allegations against the people involved in Padma Bridge project and defamed Bangladesh to seek an apology and compensate the individuals.

"Under the courageous leadership of Prime Minister Sheikh Hasina, the historic Padma Bridge has been built with our own funds and resources and now represents a nation on the road to self-reliance and prosperity," he said.

Momen was speaking as the chief guest at Bangladesh High Commission, London's celebration titled "Padma Bridge: Milestone of a Decade of Growth and Prosperity" held in East London, the heart of the British-Bangladeshi community recently.

Highlighting the significant economic growth that Bangladesh achieved in the past decade, the Foreign Minister said Prime Minister Sheikh Hasina's timely and innovative initiatives made Bangladesh a self-sufficient country in staple crop production, which increased fourfold from 11 lakh tonnes to 44 lakh tonnes, and her business-friendly government boosted export earnings from USD 7 to 8 million to USD 48 million.

Apart from this, he said, Bangladesh's economy gained a strong foothold during the pandemic as expatriate Bangladeshi including from the UK and Ireland remitted 25 billion US dollars to their homeland.

Momen expressed solidarity with the flood victims in Sylhet and other areas of Bangladesh and spoke in detail about the relief and rescue operations the government has been implementing since the recurrence of the natural disasters.

The Foreign Minister said he had discussed the latest flood situation as well as relief and rescue operations with the high authorities of the government and relevant ministries to ensure that the flood victims received adequate support.

Additionally, he had spoken with the Education Ministry about supplying textbooks to those districts where the school children lost their books to the flooding and received assurances that they would be provided with new books.

Speaking on some problems facing expatriate Bangladeshis, the minister said that he has suggested the ministries concerned to form a special tribunal to solve the disputes and cases relating to their land and property; and to ease further the security checks at the airports in Bangladesh, and issue passports in the shortest possible time.

After 51 years, she said, his visionary daughter Prime Minister Sheikh Hasina gave the historic Padma Bridge, which is a glorious symbol of Bangladesh's self-reliance and self-respect and a milestone in the development and prosperity of Bangladesh towards Bangabandhu’s Sonar Bangla.

The High Commissioner lauded the contributions of Bangladeshi living in the UK and Ireland to Bangladesh’s economy including in the Padma Bridge by sending record remittances back home.

Expressing her deep solidarity with the flood-affected people in Bangladesh including in Sylhet Division, the envoy said, “Bangladesh High Commission has set up a helpline to provide the necessary information and emergency assistance to the expatriate Bangladeshis whose family members and relatives are affected by the flooding."

Speaking on the occasion, Tower Hamlets Mayor Lutfur Rahman who is a British-Bangladeshi, congratulated Prime Minister Sheikh Hasina and her government for building the Padma Bridge, which significantly improved the country’s communication infrastructure.

Commenting on natural disasters across the world including the current flood in Bangladesh, the mayor cited the statement of Prime Minister Sheikh Hasina delivered at the COP26 in November last year, holding developed countries responsible for some of the climate-related incidents in Bangladesh.

He suggested the Bangladesh government continue its campaign so developed countries take responsibility for climate-related losses and damage.

A prominent British-Bangladeshi community member Jalal Uddin also spoke at the event, attended by over 400 enthusiastic expatriate Bangladeshi who came from different cities and towns of the UK and Ireland to celebrate the inauguration of Padma Bridge.