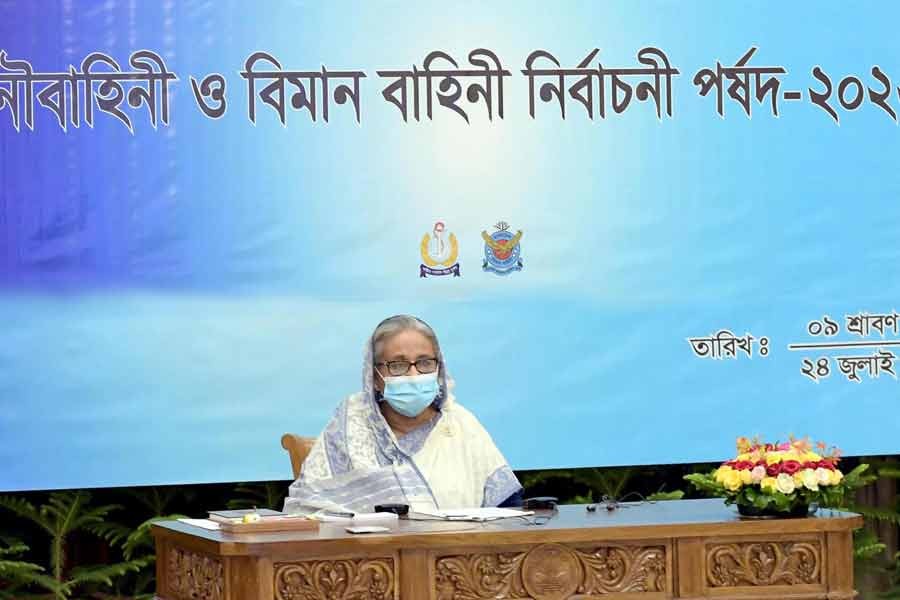 Prime Minister Sheikh Hasina has directed the armed forces to give importance to faith in the Liberation War spirit, professional skills, leadership quality, and standard of discipline, honesty, trustworthiness and loyalty while giving promotions to their officers.

She issued the directive joining virtually the inauguration ceremony of "Navy and Air Selection Board-2022" at the Naval Headquarters and the Air Force Headquarters from her official residence Ganabhaban on Sunday.

The premier said Father of the Nation Bangabandhu Sheikh Mujibur Rahman took the initiative to build modern, trained and strong armed forces to protect the sovereignty of his beloved motherland.

She added that the present government, following his footsteps, is implementing short-term, medium-term and long-term plans to build a modern military force with technological knowledge, said an ISPR press release.

“Along with the newly commissioned warships, the construction of new bases is going on,” she added.

The prime minister said they have built the Padma Bridge with the country's funding, which will contribute significantly to the overall socio-economic development of the country, including the southern region.

Besides, Bangabandhu Tunnel, metro rail, LNG terminal, deep sea port, Matarbari power plant, Dhaka elevated expressway, construction of the third terminal at Hazrat Shahjalal International Airport and the conversion of existing highways to the expressway to connect the divisional cities with Dhaka are being implemented, she continued.

“Due to the steps taken by her government, Bangladesh stands tall in the world today,” she said.

Sheikh Hasina said they are implementing Delta Plan-2100 to make development sustainable, while Bangladesh became a developing nation as the outcome of the proper implementation of Vision-2021.

“At present, the government is implementing the 8th Five-Year Plan by coordinating SDG-2030 with Vision 2041,” she added.

The prime minister noted that like every sector of the country, the Bangladesh Navy and Air Force are playing an important role in ensuring the empowerment of women. Today, the women sailors and airmen are serving their duties with reputation and professionalism at home and abroad, she added.

She said the women peacekeepers of the Navy and Air Force are engaged in important duties in the United Nations mission and they have upheld the image of Bangladesh in the world.

Besides, during the natural calamities, especially the recent floods in the north-eastern part of the country, the members of the Navy and Air Force have worked hand-in-hand with the local administration and other law enforcement agencies to serve humanity, said the premier.

At the outset of the ceremony, Chief of Naval Staff Admiral M Shaheen Iqbal extended gratitude to the prime minister for her presence in the selection board meeting of the Navy.

In his welcome address, he paid tribute to the greatest Bangalee of all time Father of the Nation Bangabandhu Sheikh Mujibur Rahman and all the brave warriors who sacrificed their lives in the great War of Liberation.

Then Chief of Air Staff Air Marshal Shaikh Abdul Hannan delivered an address, expressing gratitude to the prime minister. He also remembered with utmost respect Father of the Nation Bangabandhu Sheikh Mujibur Rahman, the greatest Bangalee of all time.

At the Navy Selection Board-2022, the official process for the promotion of officers from Captain to Commodore, Commander to Captain and Lieutenant Commander to Commander began.

On the other hand, at the Air Selection Board-2022, a decision will be taken regarding the promotion of eligible candidates for the posts of Air Commodore, Group Captain and Wing Commander.

The boards, consisting of the highest policy-making level officers, will select qualified and efficient officers for the future senior leadership of the Navy and Air subject to the approval of the government.